10 Psychological Fallacies In Crypto Trading: How To Make The Right Choices 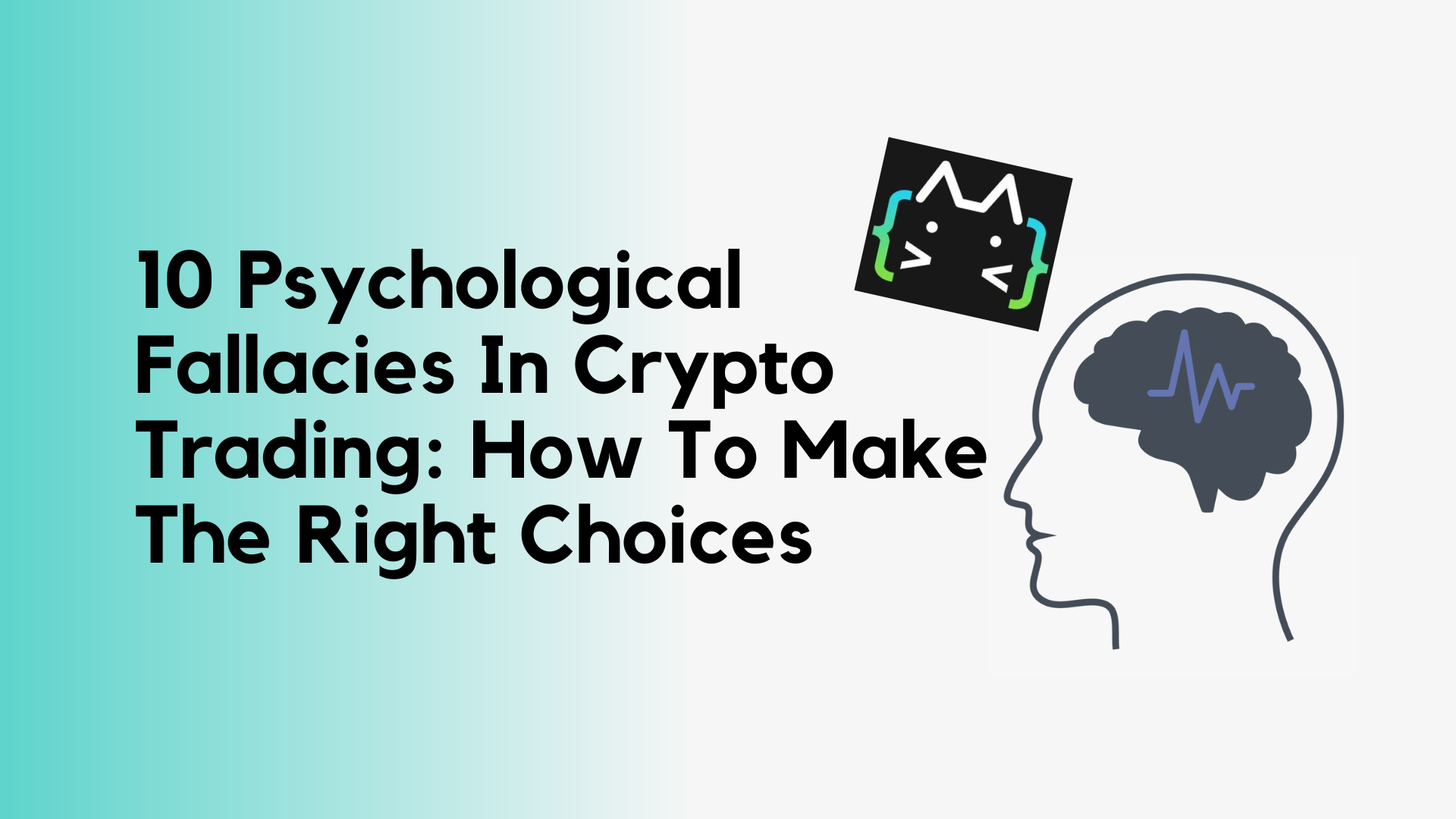 People are not as rational as we often think, and that is all the truer when it comes to financial matters and uncertainties. Because the world is so complex, we are confronted with more information than we can consciously process. Our brains then make short cuts, making decisions circumvent our conscious thought process. This can lead to psychological fallacies, which can ultimately result in making wrong decisions.

This article takes a look at key insights when making choices in uncertain times and discusses 10 common psychological fallacies that can play a role when trading crypto or NFTs.

Before we talk about decisions, it is important to first consider the concept of ‘decision’. What exactly is a decision?

What is a decision? #

In the book ‘Rational Choice in an Uncertain World’, Hastie & Dawes describe a decision as a response to a situation that consists of three different parts:

A decision is therefore a reaction to an uncertain situation, in which multiple choices can be made, which can have both positive and negative consequences.

When making a decision, it is usually mainly about weighing the positive and negative consequences of the possible choices you have. Whether people choose to make a particular investment will therefore depend on the expectations of the price at that time, the expected return and your attitude and knowledge of the risks associated with what you want to invest in.

The next question is how exactly do you make such a decision.

How do we make decisions? #

There are several theories that explain how we make decisions. In this article we discuss Daniel Kahneman’s dual process theory.

Daniel Kahneman is Professor Emeritus of Psychology and Public Affairs at The Princeton School of Public and International Affairs at Princeton University. He is an important pioneer at the interface of psychology and economics, becoming the first psychologist to win the 2002 Nobel Prize in economics for integrating psychological insights with economics, especially with regard to human decision-making under uncertainty. Kahneman is one of the most influential psychologists in the world and wrote the bestseller ‘Thinking, Fast and Slow’ in 2011. In this book he shows that people are irrational beings, distinguishing two systems of thinking: fast thinking and slow thinking.

Kahneman’s dual process theory is a basic theory of decision making. According to this theory, we make decisions based on two cognitive systems:

Both systems are very useful in practice, but we often make wrong decisions by using the wrong way of thinking without being aware of it. When we make a hasty decision on a complex issue, we do it through system 1. This can lead to psychological errors of thought, which can ultimately result in making wrong decisions. This can usually be avoided by using System 2 and making an informed decision. However, Kahneman’s book shows that when making important decisions, we often think that we are using system 2, when in fact we are not. Our brains then make short cuts to avoid wasting precious energy, causing decisions to bypass our conscious thought process. The conclusion is therefore that we use system 1 much more often than we realize.

As explained above, hasty decisions through System 1 can lead to psychological fallacies, causing us to make wrong decisions. Below is an explanation of exactly how this process works.

People are not as rational as we often lead ourselves to believe. Frequent research has shown that the calculating and rationally behaving human being, the homo economicus, is downright a myth. Because the world is so complex, we are confronted with more information than we can consciously process. This is all the truer when it comes to financial matters and uncertainties.

It starts with heuristics. A heuristic is the procedure in which an adequate, but usually imperfect, answer to a complex problem is found in a simple way. A complicated question is replaced by a simple question. This is efficient, but not always correct.

Cognitive biases, or fallacies, can then arise from the use of heuristics. This involves not applying a logical rule, while it is clearly relevant in a particular case. These fallacies can ultimately lead to wrong decisions.

It is not easy to avoid thinking errors, since system 1 works automatically and we are therefore not always aware of possible errors. If there are indications of a fallacy, this can be prevented by extra checking by system 2. It is therefore especially good to recognize situations in which thinking errors can occur, so that we become aware of them.

The anchoring effect is a psychological fallacy that causes us to rely too much on the first piece of information we get about a topic. When we make a given estimate, we interpret newer information from the reference point of our “anchor,” rather than seeing it objectively. This can distort our judgment and prevent us from continuously updating our predictions.

For example, if you first read information that a new crypto coin will be very successful and will be worth at least 100 dollars, this effect can lead to more negative information about the coin – for example an estimate of a maximum value of only 1 dollar – that you then reads less seriously. The number 100 is then used in our heads as a ‘comparison anchor’ for the estimate we make, while that number does not have to be relevant at all or even completely out of the blue.

The availability heuristic describes our tendency to use examples that come to our memory quickly and easily when making decisions about the future. When we can remember something, we will give it more weight than newer data, which means that risks and opportunities are not properly assessed.

An example of this is if you specifically choose to invest in Bitcoin, because you think you can make a lot of profit with this because you have read everywhere in the media that this cryptocurrency has increased enormously in recent years. On the other hand, if you had based your choice on a thorough analysis of options, other cryptocurrencies could also have emerged that might give you a lot more profit because they had even more growth potential than Bitcoin. In this way, your estimate is influenced and investment opportunities are limited.

The bandwagon effect is a psychological fallacy in which people do something mainly because other people do it too. Your choices are aligned with what other people do and your own beliefs are ignored. This is also known as herd behavior.

We see this phenomenon, for example, when people buy cryptocurrencies or NFTs purely because of the hype and FOMO. They then make a purchase without doing their own research, in the hope of earning money quickly. Unfortunately, this also often turns out wrong, resulting in a loss.

The confirmation bias describes our underlying tendency to focus more on and value information that fits our own existing beliefs. In such cases, information that confirms existing opinions is sought and data that refutes them is ignored. As a result, decisions are distorted on the basis of their own cognitive biases.

This occurs, for example, when we are very bullish about a particular cryptocurrency, and we filter out useful negative information that does not match our own ideas. This can lead to us not considering serious risks in decisions.

The Ostrich effect refers to ignoring negative information when making decisions, by burying your head in the sand, as it were. This effect is named after the myth about the flight behavior of an ostrich, which, when threatened, would bury its head in the sand so as not to see the enemy, assuming that the danger would not be able to see the ostrich.

We see this in practice in the tendency of investors to avoid negative information. For example, a study also showed that investors look less often at the value of their investments during bear markets.

The outcome bias refers to assessing a decision based on the (already known) outcome, without taking into account the quality of the decision that preceded it and the information that was known in advance. The correctness of a decision is thus judged solely on the basis of the consequences of the decision, and includes information that was not previously available. Just because you achieved a positive result does not mean that the decision was correct. The danger of this is that you make follow-up decisions based on the positive consequences, which can turn out very differently.

For example, if you invested in a shitcoin because it was hyped and you made a lot of profit with it, that doesn’t mean it was a smart decision and you will make a lot of profit in the future this way.

The overconfidence effect means that some people have too much confidence in their own abilities, which leads to greater risk-taking in everyday life.

We see this, for example, with traders who present their own way of trading and strategies as the means to achieve improbable, but desired profits, without considering the risks involved.

The pro-innovation bias is that a proponent of an innovative concept tends to overestimate its usefulness and underestimate its limitations or not see it at all.

For example, new crypto or NFT projects are often promoted as innovative, trend-setting and as new “hype”, causing investors to ignore the limitations or weaknesses. The fact that a certain project is innovative does not mean that it is well put together or that the team is reliable, although these are important points to consider if you want to invest in something.

The survivorship bias is a psychological fallacy that arises from focusing only on examples of ‘survivors’, causing us to misjudge a situation. We then only look at the positive results, which is often only a small percentage of the whole. The large percentage of negative results is thus forgotten and not taken into account when making a decision.

For example, you may think that it is easy to make a lot of money with crypto or NFTs, because you often only hear success stories. However, a large part also suffers losses.

Zero-risk bias is a psychological fallacy in which we prefer absolute certainty to risk when making decisions, even if it is disadvantageous. People here prefer to eliminate risk completely, while avoiding alternatives with more risks that can lead to better results. This can lead to more negative results, because better results could be achieved when risks are taken.

In this article we have explained why we make the wrong choices and we gave several examples of psychological fallacies when trading crypto and NFTs. It’s not easy to avoid mistakes like this, because even if we think we’re thinking well, we can still go wrong in predictable ways.

It is therefore especially good to recognize situations in which psychological thinking errors can occur, so that we become aware of them and avoid pitfalls in order to make better quality decisions. So take advantage of this especially.