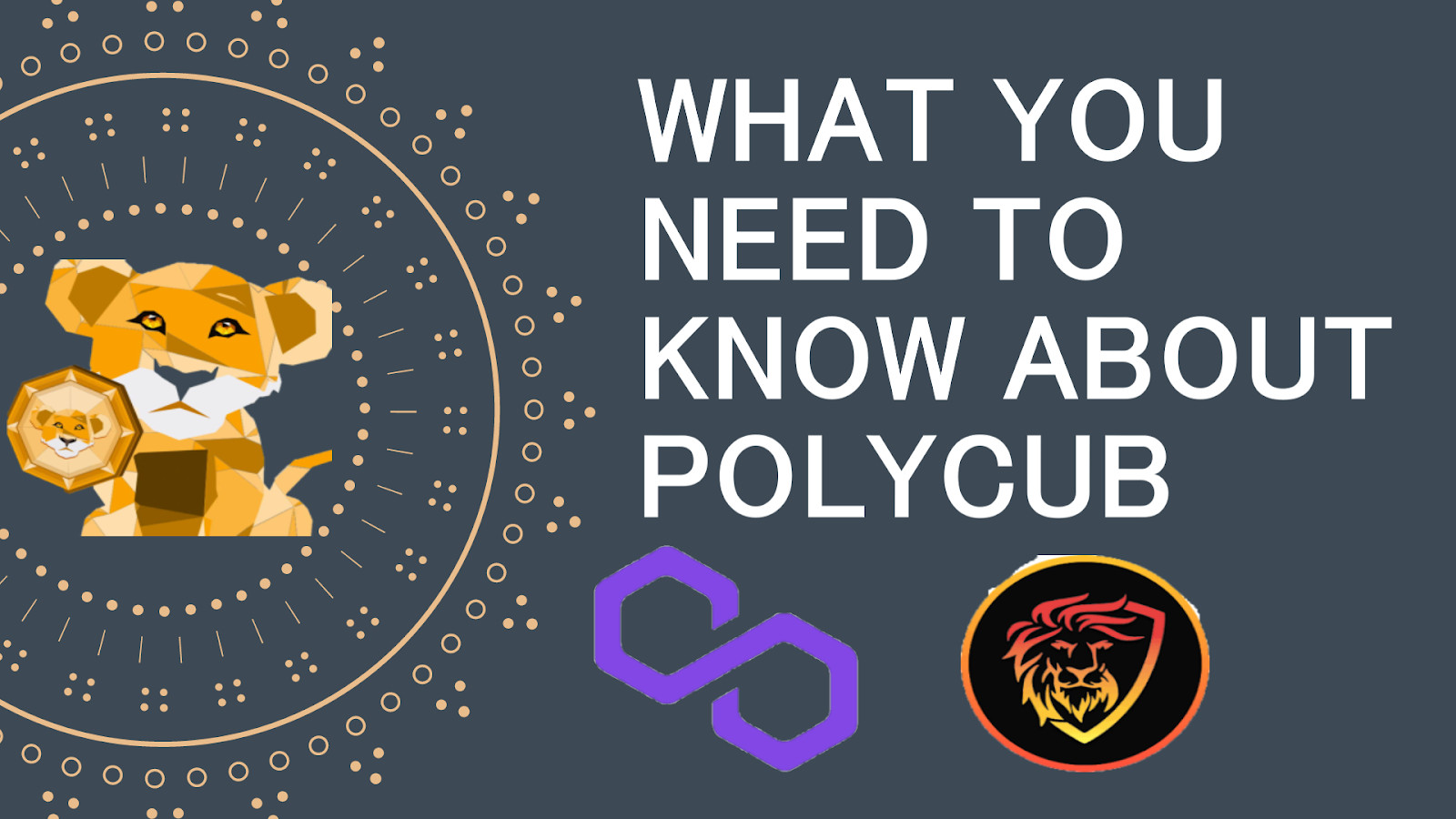 Since the beginning of March, the most recent buzz in the crypto space has been the launch of the long-awaited PolyCub on the Polygon Blockchain to establish the best platform of synergy between Leo, Cub, and PolyCub.

PolyCub is a DeFi 2.0 yield optimizer platform that allows users to discover, yield farm, and profit on the Polygon Network in a safe and simple manner. Many have compared Polycub token to Bitcoin because it aims to be a store of value or reserve currency with a limited supply of assets that can be used in the future for cross-chain activities and various DeFi protocols, similar to how BTC is utilized today.

Although DeFi is still regarded to be in its infancy, as it first appeared in 2020. Since then, we’ve seen a few successful DeFi efforts, as well as several with a less-than-flattering track record. This meant that some changes had to be made in order to make it more appealing to its consumers.

DeFi 1.0 introduced tantalizing earning potential as well as liquidity difficulties as users migrated from one network to another in pursuit of bigger incentives. DeFi 2.0 protocols are attempting to bridge that gap by providing a consistent value with advanced functionality and project potential.

Polygon Cub, also known as PolyCub, is a DeFi 2.0 project that has been in the works for almost 7 months and was ultimately launched on March 5th, 2022 and has already begun experiencing significant movements in the market since then.

The platform was created by the Leofinace team, led by Khaleel Kazi, a DeFi entrepreneur whose team is developing and launching DeFi apps while continuing to push for development in the crypto space. Over the last three years, they’ve created almost a dozen blockchain-based apps, including Leofinace.io (for Android and iOS), cubdefi.com, and polycub.com, among others.

During the development and launch of PolyCub, this goal was never far from mind. PolyCub aims to improve the tokenomics and mechanics of existing DeFi yield optimizers while also introducing community members to new options on the Polygon Blockchain.

The value of PolyCub can be easily ascertained by economic indicators or Key Performance indicators that help put a valuation on the protocol. One of such Indicators is known as Protocol Owned Liquidity.

The treasury mechanics governing PolyCUB are referred to as Protocol-Owned Liquidity (PoL). In  summary, PoL is an autonomous treasury strategy controlled by the PolyCUB smart contract ecosystem.

The creation of its own version of protocol controlled value on PolyCUB is one of its remarkable selling points. The protocol generates revenue by charging a 10% management fee on autocompounding harvests – that is, when a Sushi-swap or Quick-swap Kingdom is auto-compounded, 90% of the yield is autonomously compounded into the protocol participants’ balances, and 10% of the yield is set aside in the PolyCUB treasury address.

Airdrop appears to be the one word that we’ve all become very fond of in the cryptocurrency realm. Given that PolyCub is a sister platform to CubDefi, the Leofinance team chose a collaboration that would increase liquidity on Cub’s Binance Smart Chain while introducing users to a new and exciting world of opportunities with the DeFi 2.0 PolyCub on the PolyCub blockchain on new unimaginable dimensions.

As a result, the team has prepared a PolyCub airdrop for any users that have staked Cub in the Binance Smart Chainfor a period of 60 days from the launch date.

POLYCUB will be airdropped to everybody who has a stake in CUB:

The PolyCub airdropped should represent at least 15% of the Cub staked on the Binance Smart Chain, with daily snapshots taken over a 60-day period. This means that users with 100 Cub in the kingdom would get approximately 15 PolyCub dropped daily to the users Polygon address.

Since the 2021 DeFi frenzy swept the crypto world, DeFi platforms have dominated the sector, with hundreds of millions in Total Value Locked (TVL). However, 99.9% of these platforms have disappeared, but leofinance’s CUB, which was introduced in March 2021, has weathered these tough times since it was based on superior and sustainable tokenomics that could be swiftly iterated and expanded.

These cutting-edge features that kept Cub afloat during DeFi’s dark days have been merged and developed. In addition, successful DeFi projects were investigated to understand their operating principles, which were carefully addressed when establishing a launch pad for th PolyCub.

PolyCub has been compared to Bitcoin blockchain technology in terms of tokenomics, with a limited number of assets. PolyCub’s design process took months of intensive investigation of existing DeFi platforms. This was done in an attempt to create the most sustainable yield optimizer yet constructed. Platforms such as Aurofarm, Pancake-swap, OHM, Thorchain, and others were thoroughly researched, and a large quantity of data was acquired to aid in the development of a successful yield optimizer.

Lots of inspiration was drawn from these platforms during the PolyCUB design process by collecting all of this data and sitting at our drawing board for a few months. PolyCUB began as a wild notion to combine the most inventive aspects of all of these platforms into a Yield Optimizer for the Polygon Network. PolyCUB is now a reality. It is the most long-term Yield Optimization platform, notably through Protocol Controlled Value and xPOLYCUB Staking.

The Protocol Controlled Value of PolyCUB affects the platform’s long-term survival. PolyCub’s technology is intended to integrate OHM, Sushiswap, and Curve to provide an unparalleled PCV strategy in the current landscape.

Bonding is used to construct PCV (like OHM). It is also expanding every hour of every day through Management Fees on Kingdoms Assets, and as the team looks to the future (as with CubFinance), additional features with the ultimate goal of raising PCV.

As PCV rises, so does Risk-Free Value. The greater the overall PCV, the greater the RFV of POLYCUB. Integrating this with Deflationary Tokenomics means that POLYCUB is meant to gain in value over time, rather than deteriorate like 99.99 percent of DeFi platforms that pay yield purely through inflation.

PolyCub is the native cryptocurrency of the yield optimization platform PolyCub. Users can profit by staking xPolyCub in order to collect the 50% fines produced by other farmers who harvest their yield before the x block locking period expires.

The xPolyCub mechanism allows users to buy and stake PolyCub and earn 690 (percent as of when this post was written) of all the produce generated by all the other farmers on the site who may opt to claim their harvest before the xStakin time expires.

This is intended to encourage farmers to save their harvest until the staling period ends.

Since the launch of PolyCub, the cryptoshpere has been buzzing with expectation to watch how well it fares. However, it is important to bear in mind that PolyCub is a token that will improve over time, since volatility is predicted in the early days due to its shifting emission rates.

This simply implies that, like Bitcoin, the rate at which new PolyCub tokens are minted decreases with time, increasing their scarcity.

THe PolyCub mechanism allows users to buy and stake polycub and earn tangible annual percentage yield (APY) by all the other farmers on the platform who left early before the 90-day waiting period is over. This encourages farmers to saty the long haul. This means that investors who do not stay for the complete 90 day waiting period get a 50% penalty of their harvest.

Simultaneously, it generates an intriguing game theory for all users: many farmers are likely to claim their harvests early for a variety of reasons. For example, they need liquidity rapidly for an opportunity, anticipate things will change swiftly in the market, and so on.

With this information, other users/farmers will buy and stake POLYCUB into xPOLYCUB in order to leverage up and receive the 50% fee in addition to the other mechanism for earning as an xPOLYCUB hodler.

A 10% management fee is generated for each harvest of other platform yield on Kingdom deposits – for example, when Quickswap / Sushiswap vaults are harvested for platform autocompounding, 10% of that yield is set aside and sent to the PolyCUB PCV Treasury, while the remaining 90% is autocompounded into farmer deposits.

DeFi platforms have used a variety of techniques to management fees. Over the last few months, it has become evident that one of the most sustainable approaches for generating platform value is to leverage management fees to create a project treasury.

PolyCub is a fresh and exciting enterprise with a tremendous long-term potential; it is in the best interests of investors to grab a piece of the cherry while it is still early and hold for as long as possible because the prospects of this project show astronomical benefits.