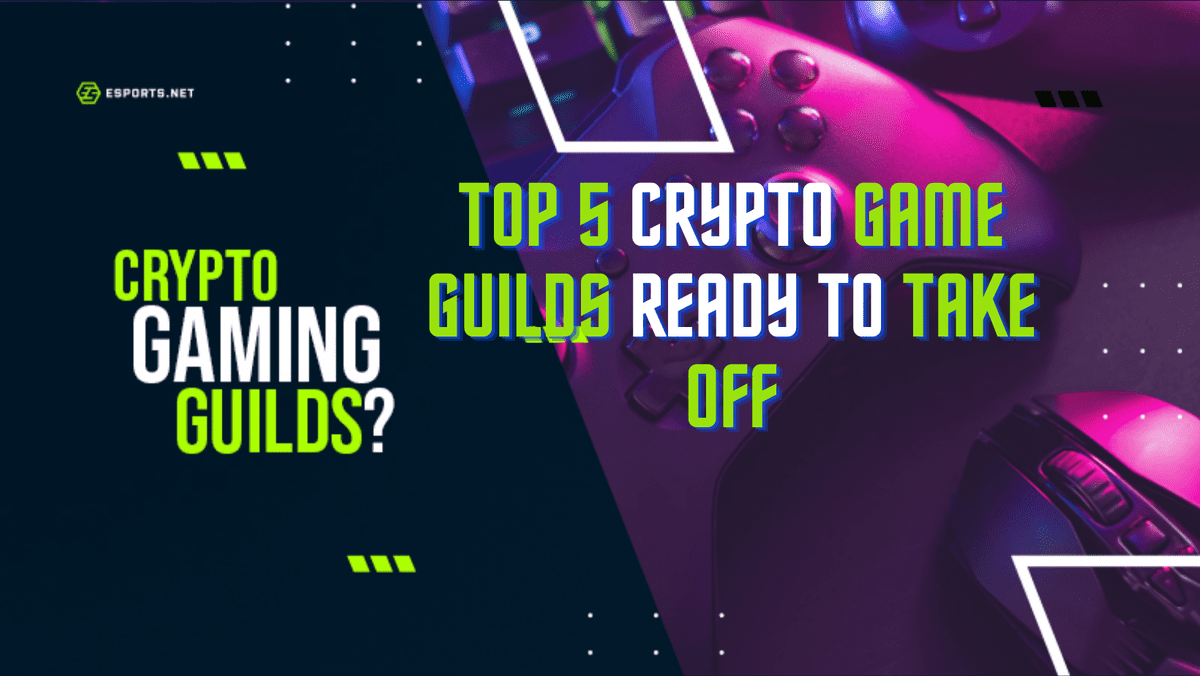 Playing video games for money. It would seem like a dream come true for most preteens and teenage boys. Playing games for money isn’t the only thing involved. Cryptocurrency or USD-equivalent is also being earned.

In countries with weak currencies, such as the Philippines or Indonesia, earning crypto or a USD equivalent does more than just ‘bank the unbanked. A lot of these communities have become prosperous because of cryptocurrency, and you can invest in some of them as well.

Yield Guild Games is the largest guild that we are covering in this article. As of writing, Yield Guild Games has a USD 650 million market cap. Guilds are groups of people who play games together and share profits and in-game assets earned from winning battles or completing quests successfully.

In addition, they plan to bring liquidity to P2E games and make it easier for young people to get started at lower prices than some of the entry points to some of these games.

The Yield Guild currently has more than 4,700 scholars. The scholars are either renting or doing a profit-sharing arrangement to use the Guild’s assets. As a result, they are able to play a game they might not be able to afford and contribute to the Guild’s growth. Rent is paid by 10% to the DAO.

A $4.6 million investment round was led by leading VC Andressen Horowitz in August 2021. Before that, they had raised $5.3 million from investors such as Delphi Digital, Blocktower Capital, and Animoca Brands. Here you can find all the investors of Yield Guild Games.

On the other hand, $YGG is the native token of the crypto game, which is an ERC-20 token that they use for governance. Despite the fact that the token is backed by Guild assets, you do not participate in the Guild’s cash flow.

Private investors, advisors, and founders all have lockup periods and vesting schedules, which is why we like tokenomics. A disgruntled employee or investor can’t dump a large amount of tokens into the market. The founders, for instance, have a lockup period of two years and a vesting period of three years. One billion tokens are available. Based on an $8.50 price per YGG, there are 87.9 million circulating units and $760 million in liquid market capitalization.

Lastly, the roadmap envisages a complete DAO in which the DAO token holders will receive voting rights, dividends, and other distributions of revenue. But YGG hasn’t reached this stage. It’s a plan, though.

Merit Circle is governed by a DAO, which provides governance and also is the more prominent holding company of all the subDAOs. Currently, the platform works with Axie Infinity. Star Atlas, Illuvium, and Hash Rush will be added soon.

Both Yield Guild and Merit Circle have this for each of their subDAOs in their guild ecosystems. Essentially, Axie Infinity has a subDAO that only holds Axie assets. Both The Sandbox and Guild of Guardians have their own. All report to the main DAO.

This is how large conglomerates operate, withholding companies with separate business units. This is how guilds function. The assets of the other games are not affected if a hack occurs in one of the games. Divestiture. DAO earns 20% of rental fees, including from the scholarship program, on the DAO’s fees. Currently, Merit has 1200 scholars.

At its current price of $7.21, Merit Circle’s native token $MC has a total supply of 1 billion tokens and a circulating supply of 42.5 million, giving it a market cap of $307 million.

Good Games Guild has over 300 scholars in its program. Good Games Labs, their investment arm and game incubator, is one of the more exciting features. The Guild has a DAO for management and governance, and the DAO earns 20% of all revenue generated by the Guild, including scholarship funds.

Good Games Guild, on the other hand, has its own native token, $GGG, which has a supply of 100 million tokens. There is no information on their current value or circulating supply.

Finally, the roadmap has three phases:

UniX Gaming is our next Guild. They have 1200 scholars and a DAO. In addition to Axie Infinity and Splinterlands, UniX works with Star Atlas. All of the in-game assets belonging to a game have their own subDAO, just like the other guilds. UniX offers a stake of its native token called $UNIX.

The DAO earns Revenue in a few ways, including:

Additionally, the roadmap mentions the launch of the NFT platform for peer-to-peer sales, the ‘Learn to Earn’ program, and merch (clothing, hats, etc.).

Among the partners are AU21 Capital, Argo Blockchain, LD Capital, Scrypto, and about 15 or 20 others. New games on the horizon include Guild of Guardians, The Sandbox, My DeFi Pet, and Alien Worlds, among others.

Alternatively, Unix Gaming has a native ERC-20 token called $UNIX, which serves as the DAO’s governance token. A total of 52% of tokens are available to the public between the community, liquidity, staking rewards, and treasury (to help fund the DAO).

There are 1 billion tokens in the $UNIX system. Assuming a price of $1.33 and circulating supply of 32 million, their market capitalization would be $42.4 million.

The first thing you should know about our final Guild for today, Astra Guild Ventures, is that they are having their public sale December 7th-16th. Metamask’s Launchpad allows you to connect and use your wallet.

There are more than 2000 scholars on Axie Infinity under Astra. 20% of the revenue goes to the DAO. Transparency is one of the reasons that makes Astra unique. You can see what the DAO is earning directly from the front page of their website.

Additionally, you can view the number of assets each Guild team has. After the audit, Certik will conduct the public sale. The wallet balances can be seen to the dollar.

The company has 20 investors, including Crowdcreate, BIP 32, Dot Finance, and Point3 Ventures. Two games are owned by the DAO: Kart Racing League and Realm of Ethernity.

Astra Guild Ventures, on the other hand, makes its native token known as $AGV. $AGV, which governs the DAO, will have a total supply of 2 billion tokens. Five percent of the tokens will be made available to the public by the Treasury and the Community. To prevent investors from being dumped, the founders and advisors have a two- to three-year lockup and vesting schedule. Treasury shares vest as well.

Finally, according to the roadmap, here are the following milestones:

How To Create a YGG Guild Badge?Introduction to the Ronin Network (RON)