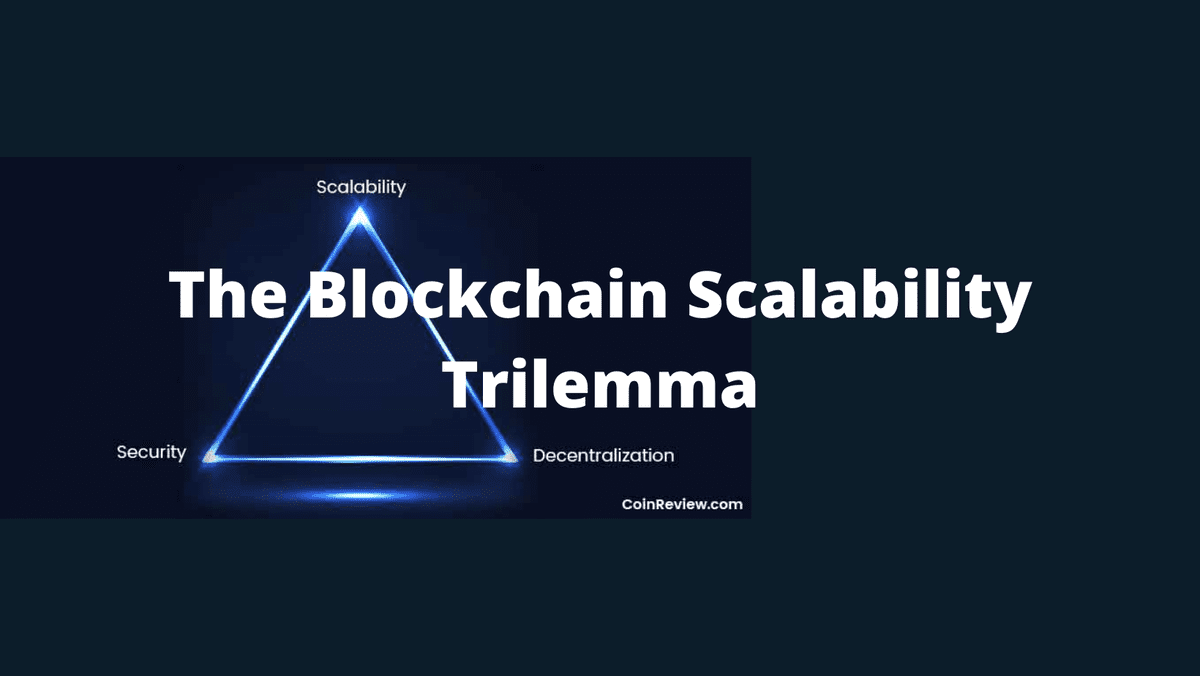 The blockchain trilemma refers to a widely held belief that decentralized networks can only provide two of three benefits at any given time with respect to decentralization, security, and scalability. However, ongoing innovation across the decentralized ecosystem has led to a diverse range of Layer-1 and Layer-2 solutions that are overcoming these obstacles to solve the trilemma once and for all.

The term “trilemma” has seen an increase since 2021. It begs the question on how to solve the issues that many layer 1 solutions tend to have in order to become successful. Seeing that Layer 1’s such as Ethereum have scalability issues have given rise to other Solutions such as Solana, Cardano, Binance Smart-Chain, and many more…

In this article, we will deep dive into how this came to be, and what is being done to make the networks stable and scalable.

What Is the Blockchain Trilemma? #

The blockchain technology has proven its utility in a range of industries from finance to art, yet the underlying structure of decentralized networks poses unique challenges compared to centralized networks. In the 1980s, computer scientists developed what is known as the CAP theorem to address perhaps the most critical of these challenges. A decentralized data store – of which blockchain is an example – can only provide two of three guarantees simultaneously: consistency, availability, and partition tolerance (CAP). The blockchain trilemma refers to this theorem in the context of modern distributed networks. According to this belief, public blockchains must sacrifice either security, decentralization, or scalability.

In contrast to client-server infrastructures such as VISA or the internet, public blockchain networks rely on decentralized consensus mechanisms. By managing a distributed network of nodes, data consensus can be achieved over an infrastructure that is resistant to outside attack while maintaining transparency and openness. What a challenge! While Bitcoin is decentralized and secure, it can only transact approximately seven transactions per second (TPS). Enterprise blockchains like Hyperledger Fabric are secure and can handle large transaction volumes, but they are centralized to a very small number of consensus-achieving nodes. Fast and decentralized blockchains that are insecure, on the other hand, are vulnerable to hacks in the long run.

It is the holy grail of blockchain technology to achieve a highly secure, decentralized network that can also manage internet-scale transactional throughput. There is a global community of businesses, start-ups, and technologists solving this blockchain trilemma by developing Layer-1 and Layer-2 solutions. Layer 1 blockchain networks are designed to be fast, secure, and scalable. Technology optimizations and products that can be used with existing blockchain networks to increase their scalability are considered layer 2. By achieving the right balance between the two layers, blockchain tech may be adopted and decentralized networks may grow rapidly.

Blockchain technology is based on decentralization, which drives projects across the ecosystem. By implementing decentralized processes and technology, intermediaries are eliminated in many industries. Decentralized finance (DeFi) platforms, for instance, are able to distribute profits and governance to users rather than an intermediary by removing banking institutions from financial instruments. On an even deeper level, decentralized networks crowdsource consensus, meaning that no one entity can control or censor the data that transacts through them. The problem is that achieving optimal decentralization tends to reduce network throughput. As the network is secured by more miners through consensus, transaction speeds drop — which is considered a hurdle to widespread adoption.

What Is Blockchain Security? #

There is an incentive to reduce the distribution of blockchain nodes either geographically or in number on a blockchain network, so as to improve network throughput. This move towards greater centralization, however, reduces security on Proof-of-Work (PoW) networks. A 51% attack is more likely to occur on an open network with a limited nodal distribution because hackers can accumulate computing power more easily. Hackers can manipulate transactions and hijack networks by overwhelming them. As an example: the Ethereum Classic (ETC) blockchain – which is unrelated to Ethereum – suffered three 51% attacks in August 2020, which reorganized over 4,000 blocks, allowing the perpetrators to manipulate data and double spend the ETC currency, which resulted in millions of dollars being lost. Blockchain security is a critical aspect of a network that cannot be compromised.

The scalability of a blockchain protocol refers to its ability to support high transactional throughput and future growth. As use cases expand and adoption of blockchain technology accelerates, scalable blockchains will continue to perform well. Scalability is said to be lacking in blockchains that perform poorly as adoption rises. Due to the blockchain trilemma, greater scalability may be possible, but security, decentralization, or both may be compromised. To compete with legacy, centralized platforms whose network settlement times and usability are far superior, blockchain networks must scale. Today’s leading decentralized networks face a major challenge in scalability, despite the fact that most blockchain platforms have established decentralization and security.

Is there a way to solve the blockchain trilemma while simultaneously achieving decentralization, security, and scalability? Layer-1 and Layer-2 solutions are the answer.

Blockchain protocols such as Bitcoin, Litecoin, and Ethereum are classified as Layer 1 in the decentralized ecosystem. The scalability of blockchain networks can be improved directly via a number of methods that are currently in development or in use.

Improvements to the consensus protocol: Proof of Work is the consensus protocol currently in use in popular blockchain networks such as Bitcoin. It is secure but slow. Bitcoin, for instance, only achieves seven transactions per second. Due to this, many blockchain networks – including Ethereum 2.0 – prefer the Proof-of-Stake (PoS) consensus mechanism. The PoS consensus protocol does not require miners to solve complex cryptographic algorithms, but rather determines validator status according to stake in the network. This is expected to dramatically expand the Ethereum network’s capacity while increasing security and decentralization at the same time.

Despite its slightly experimental nature within the blockchain sector, sharding is one of the most popular Layer-1 scaling solutions. Sharding divides transactions into smaller sets of data called “shards.” These shards are simultaneously processed on the network, allowing sequential work on multiple transactions at the same time. The information could be split and held by different nodes so that each node remains consistent with its own copy, as opposed to each network node maintaining a copy of each block from genesis to present. Using cross-shard communication protocols, shards share addresses, balances, and general state across shards and provide proofs to the mainchain. A number of blockchain protocols explore the use of shards, including Ethereum 2.0, Zilliqa, Tezos, and Qtum.

In the blockchain industry, Layer 2 is a network or technology that improves scalability and efficiency of the underlying blockchain protocol. In contrast, Bitcoin is a Layer-1 protocol, and the Lightning Network is a Layer-2 solution designed to improve the speed of Bitcoin transactions. Recently, Layer-2 protocols have seen immense growth, and they are proving to be the most efficient way to scale PoW networks.

Using nested blockchains, an interconnected system of secondary chains performs execution while a main blockchain sets parameters for the broader network. On this main chain, multiple blockchain levels are built, which are connected to each other through a parent-child relationship. Child chains complete the work and return it to the parent chain after completion. If a dispute resolution process is required, the underlying base blockchain does not take part in network functions. A nested layer-2 blockchain infrastructure such as OMG Plasma facilitates faster and cheaper transactions over Layer-1 Ethereum. Due to the distribution of work under this model, the mainchain processes less work, resulting in exponentially better scalability.

Through state channels, a blockchain can communicate with off-chain transactional channels in a two-way fashion to improve performance and speed. These channels do not need immediate validation by a miner. In reality, it is a network-adjacent resource that is sealed off through the use of multi-signature contracts. The final “state” of a state channel and its transitions are recorded to the blockchain when a transaction or batch of transactions is complete on it. State channels include the Liquid Network, Celer, Bitcoin Lightning, and Ethereum’s Raiden Network. State channels sacrifice a certain degree of decentralization in order to increase scalability in the trilemma tradeoff.

Sidechains are blockchain-adjacent transactional chains used for large batches of transactions. The sidechain uses a separate consensus mechanism to the original chain, which can be optimized for speed and scalability, and a utility token is often used as part of the data transfer mechanism between the sidechain and the main chain. Mainchain’s primary function is to maintain security and resolve disputes. The main differences between state channels and sidechains are outlined below. Sidechain transactions are not private between participants – they are publicly recorded on the ledger. Furthermore, sidechain security breaches do not affect the mainchain or other sidechains. Building infrastructure from scratch is a major undertaking when establishing a sidechain.

The blockchain trilemma presents a significant challenge for blockchain technology adoption; however, solutions are emerging to find an effective and simultaneous balance between network security, decentralization, and scalability. Although the CAP theorem has held true for almost four decades, the implementation of Layer-1 and Layer-2 solutions along with the emergence of Proof of Stake in blockchain technology is poised to shift the paradigm toward decentralized networks that are simultaneously distributed, secure, and scalable.

What Is BitPayWhat Is an Airdrop?