Pegaxy: How to make money Racing 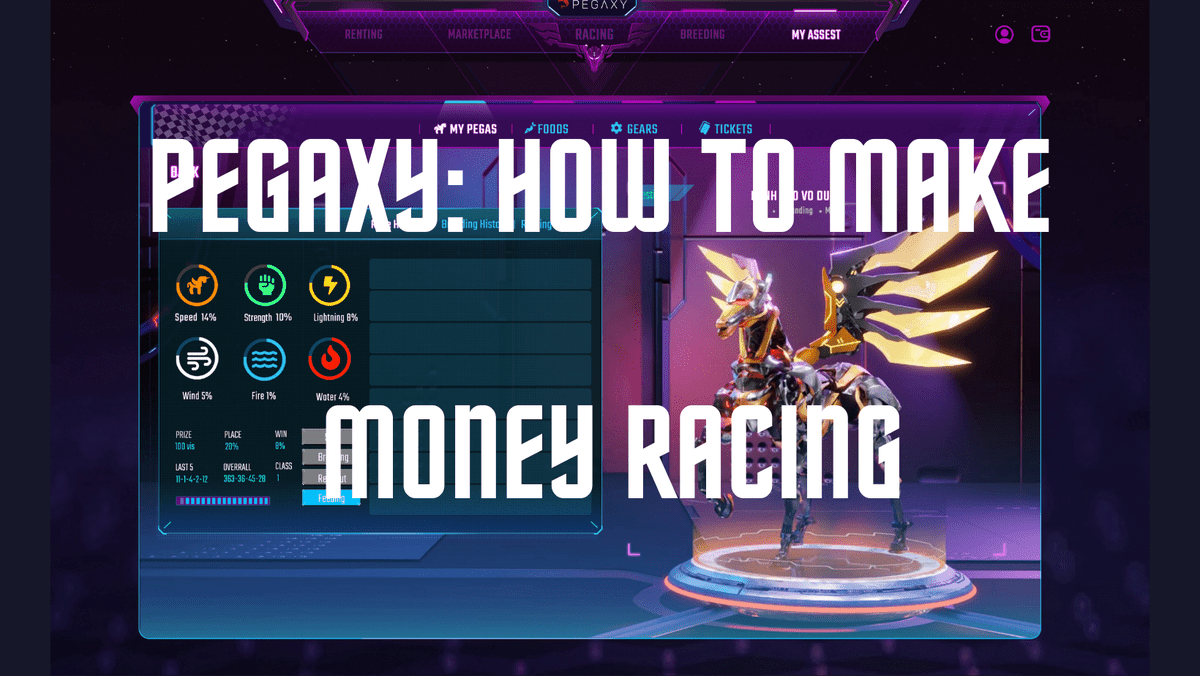 Before a race, players must adjust their Pega according to the track’s elements. All races are free to enter, and there is no fee for racing. Participants must have one Pega to participate.

In the Pegaxy game, select “Race” once you are logged in. Click “Ready” and you will be pushed into a lobby based on your Pega’s “Class”. The lobby will become full after 60 seconds have elapsed. You will have the opportunity to configure your Pega’s attributes by fitting “Gear” (if you own any gear) during this time.

The Gear has both positive and negative effects on attributes. You will lose 1% in Speed or Fire if you use a Chest Plate that adds 1% Strength. For a simplified formula, here it is: Speed <-> Strength <-> Fire <-> Water <-> Wind <-> Light <-> Speed.

To match race conditions, it’s important to use strategy when selecting and putting on gear. You simply wait for the countdown to end if you don’t own gear.

The most gear stacked during a race won’t guarantee victory. Gear, when used in conjunction with strategy to your advantage, can assist in balancing your Pega’s performance depending on the track conditions.

After the 60 second timer ends, you have officially joined the race. Pega positions can be tracked on the left or the track can be viewed on the right.

Here’s a list of factors that determine the race results:

A traditional/manual skill-based game will eventually replace Pegaxy as an auto-racer. It will be necessary for racers to manually control their Pega, which will give skilled players a better chance at winning. Updates will occur after the game is released.

According to the developers, the following features are in development:

Race day has come to an end. It is not necessary for you to take any further action.

Nevertheless, for transparency, we have provided you with access to all the Pega that competed, and when clicked, you can view each Pega’s race history, bloodline, and more.

In addition to daily competition, the Metaverse wants to know who the best racers are! Every December, the Grand Dash event holds qualification rounds followed by the Grand Dash Final.

Each month, 12 racers with the highest statistics in each class are selected for the annual Grand Dash Tournament. The Grand Dash Final is held every December after 11 qualification months.

In every month, 60 players across 5 classes qualify for the Grand Final, with 132 total racers qualifying from each class (660 players from all classes combined). The Grand Final is the biggest racing event in the Pegaxy Metaverse. For each class, spectators can watch the quarterfinals, semi-finals, and grand finals live on all platforms with live statistics.

You do not need to qualify again once you have qualified for the Grand Dash. Additionally, if you are qualified and finish in the top 12 the next month, the position will be filled by the player in 13th place.

As the Pegaxy game moves towards a player-skill reward system – players that practice and learn the game mechanics, that dedicate a lot of time to racing and creating superior strategies. Those who win eSports style tournaments will not be those with the most money and can simply “buy” the best Pega, but will be those with the most skill in the Metaverse. We believe this is the best way to make competitive racing fair for all players, regardless of their budget.