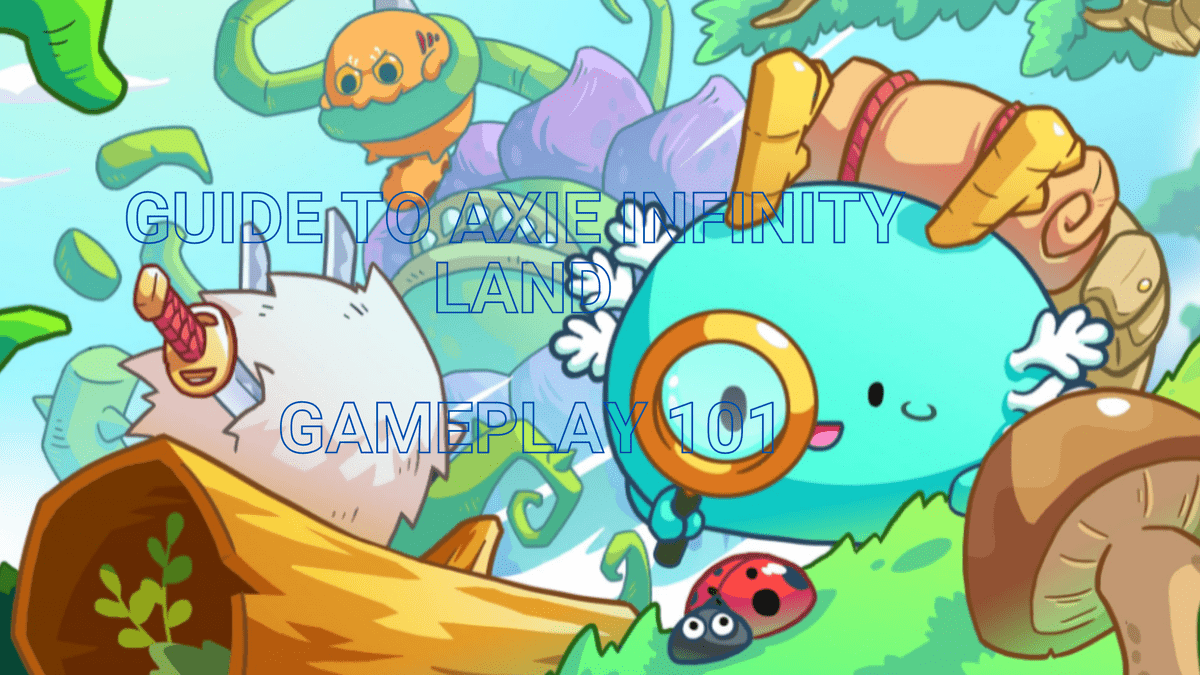 The metaverse of Axie Infinity is known as Land or Lunacia. In Terra, land parcels are tokenized and divided into TERRAs, which can be bought, rented, and organized by their owners.

Tokenized plots of land are represented by a 301*301 grid with each square representing a plot of land. A land plot consists of 64 spaces in an 8×8 grid.

The following picture shows the land that players owned in Axie Infinity: 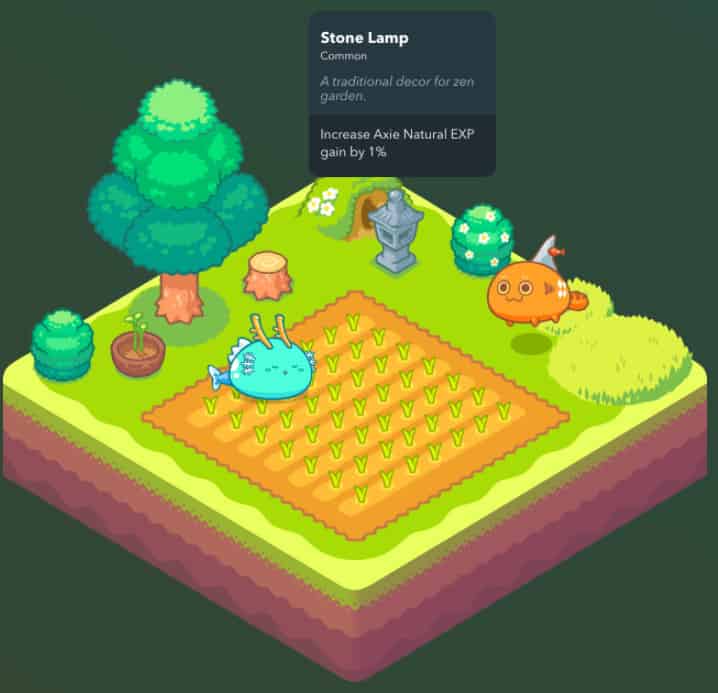 As you can see from the picture, players can place their axes on each of their Lands as well as items that will increase or boost their axies’ stats. The Stone Lamp, for example, can increase the Axies’ natural experience gained by 1 percent over time.

According to the whitepaper on Axie Infinity, a plot of land can be assigned 3 Axies and in the future, it will be possible to upgrade a plot of land to hold more Axies by building certain structures. Farmed resources will belong to landowners.

Four types of lands were minted by Axie Infinity: Savannah, Forest, Arctic, and Mystic. Axie’s first land sale was held on January 21st, 2019, and these four lands were already distributed. Fourteen (14%) of the Axie metaverse’s total land plot supply was sold previously, while mostly three (3) quadrants remain to be sold at a later date. 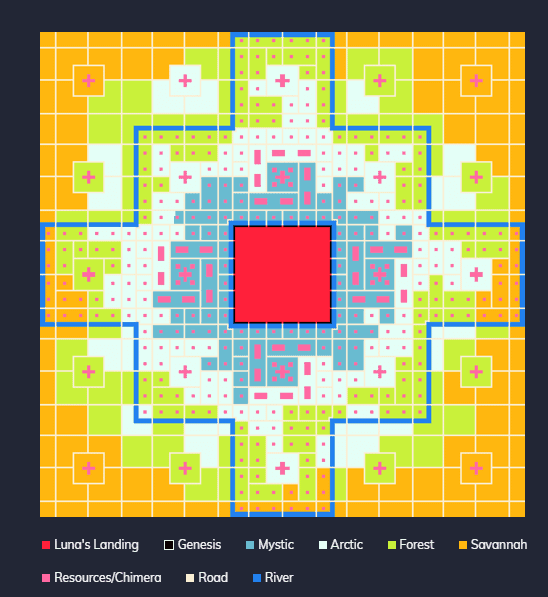 Land pieces with higher chances of spawning rare bosses are called Genesis lands. All resources collected on these special types of lands will be divided among the landowners. There are 220 Genesis plots available, and 75 of them were released during the initial sale. Special world events will be hosted by players who acquired Lands in Lunacia, which are market as red in the image above.

Axie Infinity: How to Buy Land #

Land can be purchased fairly easily. We assume you already know MetaMask, Ronin sidechain, and Axie already. Axie Infinity Lands can only be purchased with ETH, so be sure you have some. 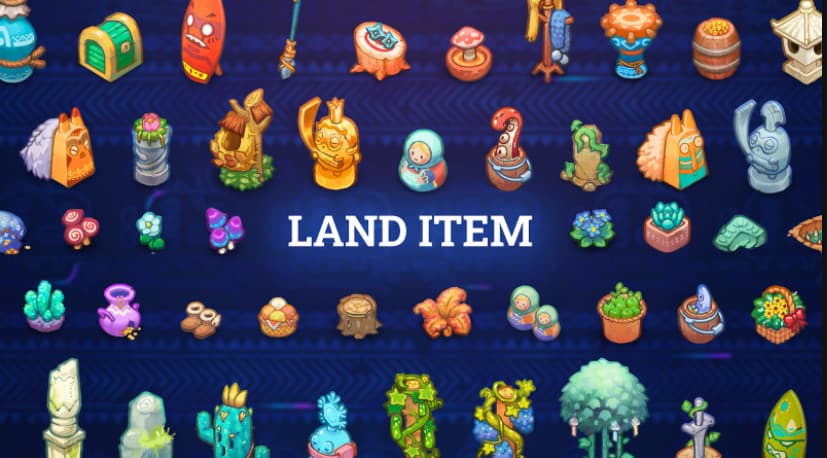 On Axie Infinity lands, you will find four (4) different types of rarity:

Lunacia lands can currently accommodate 199 different types of Land Items. Axies can be enhanced with such items.

The picture above is an example of a Lunacia Land item called “Bird Plushie.” It is a Mystic land item that boosts the item drops from Chimera by 20 percent and your Bird type Axies base stats by 20 percent.

How to Acquire Land in Axie Infinity # 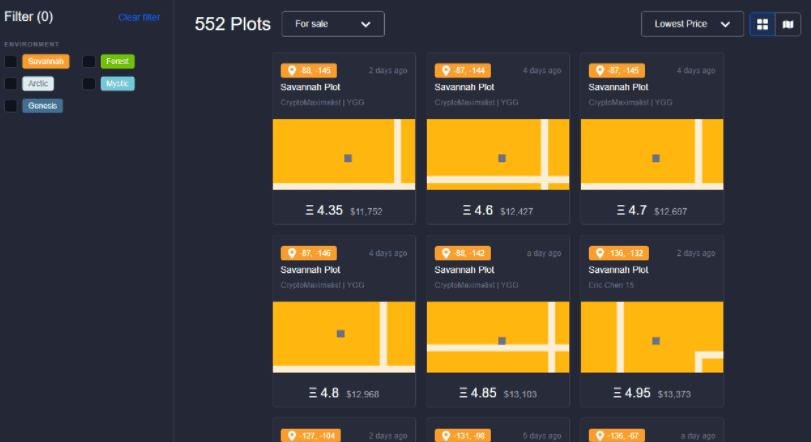 Unfortunately, There’s not much information about what Land Play is going to look like. We were able to find a snapshot of some older test Lunacia Land Gameplay.

Whenever a piece of land is attacked by enemies, known as Chimeras, you will need to battle them. This Real-Time PVE Battles will look as follows:

In real-time battles, players can take on Chimera alone or in groups. By defeating the Chimera, the player or players can gain access to a variety of resources, items, blueprints that can be used to upgrade their territories, individual axes and even limited-edition tokens.

Several resource-gathering features can also be found in Lunacia Land. As every landowner has the right to every resource that spawns on their land, they can use these resources to upgrade both their land and their Axies. Resources that spawn on a player’s territory will become available to the public if the player fails to harvest them within 24 hours.

Buildings can be built by landowners within their owned territory, which can also expand and level over time, but blueprints must be obtained by defeating Chimeras in order to be able to build these structures.

Independent developers, content creators, and companies can also build apps and future games on top of Lunacia Lands, according to the Axie Infinity team. Through Lunacia’s software development kits (SDK), landowners have an infinite number of possibilities. According to the whitepaper roadmap, it will be released in the second half of 2022.

Once Lunacia SDK has been released, we can expect a more open Axie Infinity platform that can create more opportunities for players and breeders of Axies.

Lunacia SDK can be used to create games and other experiences within the Axie Metaverse, according to Axie Infinity. It is also possible for creators to create or mint their own Non-Fungible Tokens (NFTs) which can be traded with other players. Other players can click on these NFTs to enter the game inside by placing them on their land. As a result, Axie Infinity becomes a truly decentralized NFT game.