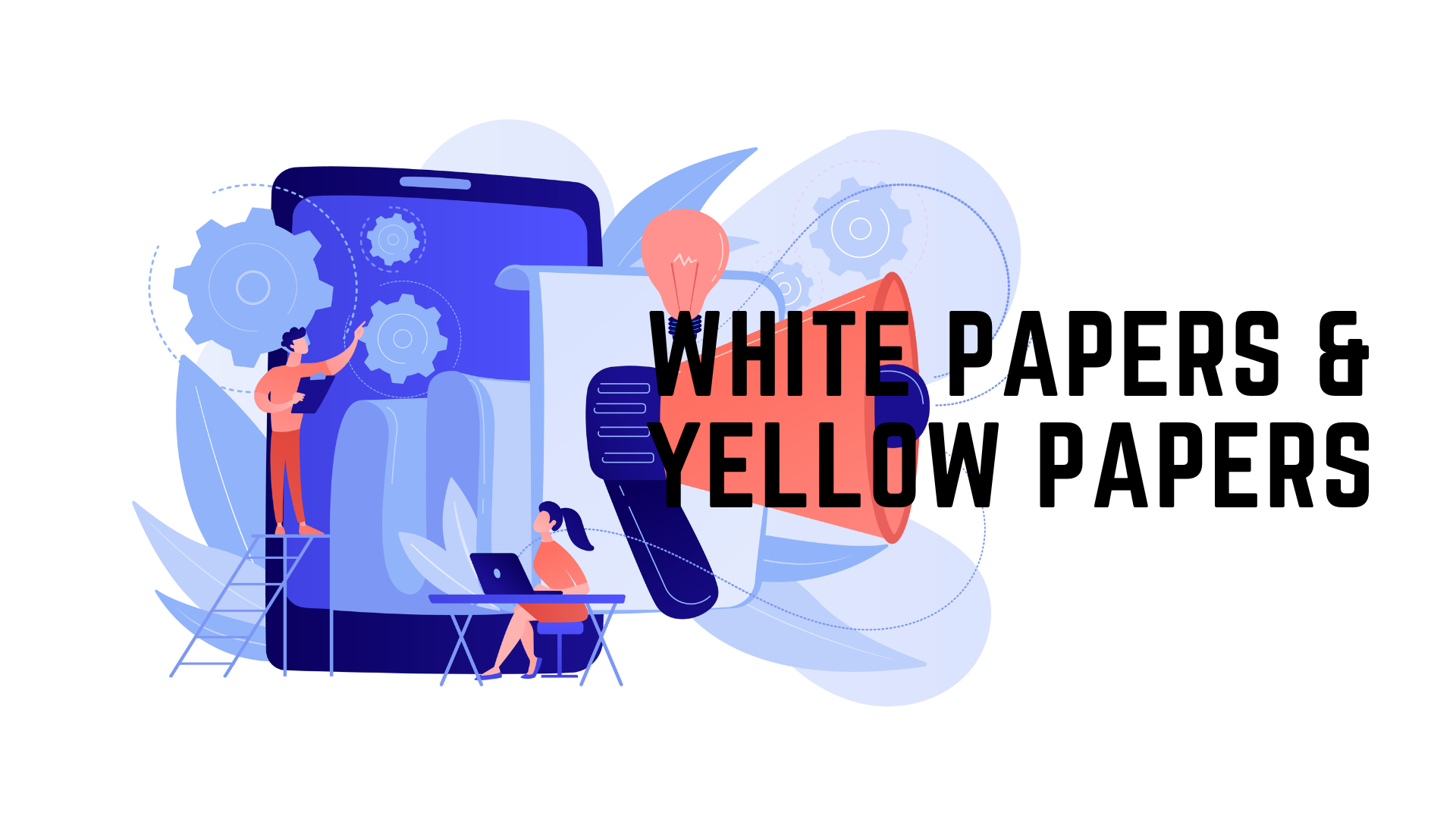 New crypto projects are created every day. With now more than 10,000 projects, that number keeps increasing. But where do you get the right (and legit) information about these projects?

With the smartphone in hand, we can be online anywhere, anytime. This means constant access to social media, but is this the best way when it comes to information provision of crypto projects? Anyone can post whatever they want. However, we still have official documents issued by the team itself. We know this as the ‘white paper’ of a protocol. But did you know that there is also a yellow paper?

What is a white paper? #

Thus, in the world of crypto, a white paper is a document composed and published by a protocol’s team that explains the technology and purpose of a protocol. Think about:

Blockchain technology is a novel technology that is still unknown territory for many. That is why a white paper is also intended to provide more information in a simple way. A white paper must be understandable to a large audience, so they must understand exactly what a protocol does, what problems they tackle and what is their vision and mission.

The term ‘white paper’ originated with the British government as early as 1922. Many consider Churchill’s 1922 white paper to be the very first copy as we know it today. If we look further in history, we see that a similar example was already used in the 15th century. Not a white paper, but a ‘blue book’. A large blue book, covered in velvet, was used to keep records of Parliament in England. This concerns all kinds of statistics and personal or non-personal information.

When a particular subject was less serious to the government, the velvety blue cover disappeared leaving them only white covers. Later, the variant ‘white paper’ arose. These color codes were given by the government to indicate the distribution of a document. The color ‘white’ means that the document was intended for the general public.

In the world of crypto, the most famous white paper is undoubtedly the Bitcoin white paper published in 2008 by the mysterious Satoshi Nakamoto. The white paper called “A Peer-to-Peer Electronic Cash System” was the start of this new financial revolution and the decentralization of monetary policy.

In practice, in the world of crypto, we see a combination of background and problem solving. A problem is usually raised in a simple way, which the team wants to solve. This is the starting point of a particular protocol.

The best example is, of course, Bitcoin’s white paper: A peer-to-peer Electronic Cash System. A new revolution is ushered in in this legendary document. The Bitcoin whitepaper is divided into 11 parts that briefly explain the protocol, such as:

What is the purpose of a white paper? #

This may seem like a superfluous question, but what exactly is the purpose of a white paper? A white paper is intended to explain a protocol and to share their vision and mission with the general public. And this in a simplified and clear way. The purpose of a white paper is of course to inform as many people as possible, in the hope that they too believe in their vision. White papers are also intended to convince potential investors.

What is a yellow paper? #

A yellow paper is a technical, mathematical description that goes deeper into, among other things, the programming of a specific protocol. For example, Ethereum (ETH) is a decentralized blockchain in which individuals and organizations can transact among themselves based on smart contracts, without interference from third parties. But how exactly does that work? How does it work in the source code, what happens? A white paper provides more information about this, but as a non-programmer it all remains abstract. Abstract enough to understand as a ‘normal’ person. A yellow paper, on the other hand, is written for a completely different audience and target group.

The first yellow paper was written by Dr. Gavin Wood for the Ethereum blockchain. Gavin Wood is an English computer scientist and no stranger to the world of crypto. He is also involved in Polkadot (DOT) and Kusama (KSM) among others.

Characteristics of a yellow paper #

Thought a white paper was complicated already? Then you’ve probably never seen a yellow paper. From complex mathematical formulas to a whole bunch of numbers. The yellow paper is a deep dive into the technology of the protocol, for interested parties and programmers. We can characterize a yellow paper by the following properties:

What is the purpose of a yellow paper? #

But if a white paper is already a marketing document to convince potential investors, why another yellow paper? In addition to full transparency, which is a pillar in blockchain technology, a yellow paper reaches a completely different target group. A yellow paper is designed for developers, with more knowledge of blockchain.

Blockchain technology is still relatively young, we are still on the eve of the biggest technology revolution. In this era, it is important to have the best developers and developers on board to help build this bright future. By means of a yellow paper they can address potential developers in the hope that they too will help build their protocol.

Do you want a partnership? Then a yellow paper is often decisive. In addition to a rather general vision and mission, partners want to know exactly how they want and can achieve their objectives. This is only possible if they are transparent about the computational issues that could make this future possible. This is not only a possible burning mechanism, but everything from A to Z is covered in this technical yellow paper.

It is great to have an institutional investor who is willing to invest a large sum in your project. But before this happens, this investor wants to have enough information to determine for himself whether it is worth the investment. Simply making an investment based on a vision and mission may not be so wise. A technical explanation in the yellow paper also provides institutional investors with more information about the viability of a project.

What is the difference between a white paper and a yellow paper? #

Let’s look at this by comparing Ethereum’s white paper to Ethereum’s yellow paper:

For someone with limited experience in blockchain technology, a white paper can also be quite impressive. But still, this version is much accessible to the general public.

A good example to make this comparison is by looking at the transaction costs. Have you ever bought an NFT on OpenSea or made a transaction on Ethereum’s network? Then there is a good chance that you have paid high amounts in transaction costs. We now know that the busier the network, the higher it costs. But how exactly does this work? In the Ethereum whitepaper, they give an “introduction” to “starting gas” and “gas price”. So, a limited number of formulas, but a general approach for the wider public.

Are you curious about how the gas price is calculated exactly? Make a few ‘simple’ calculations and you can get started yourself. There is a relatively good chance that you will not learn from this, while it is invaluable information for developers. You can immediately see that a yellow paper has been made for a completely different target group. The average retail investor will not be able to do much with this information, they study the white paper and focus on the vision and mission and the concise version of the technical aspect.

What is a Beige Paper? #

We also have a light paper. This is an abbreviated and condensed version of a white paper. It is a simplified document of the white paper, citing and explaining the main points. This allows readers to learn a protocol and how it works in a relatively short time. It is in fact the first step to the white paper. Are readers captivated and still want to know more? Then they can consult the white paper. Let us present these variants schematically.

Good information is invaluable, but how do you reach a large audience and adapt your information based on your target group? Blockchain technology is still novel, and to provide everyone with sufficient information, several documents are often created. These papers have a different focus but are all about the same protocol. Not every project has 4 different papers, it depends on the team and the project.