Cosmos — the ‘Internet of Blockchains’ 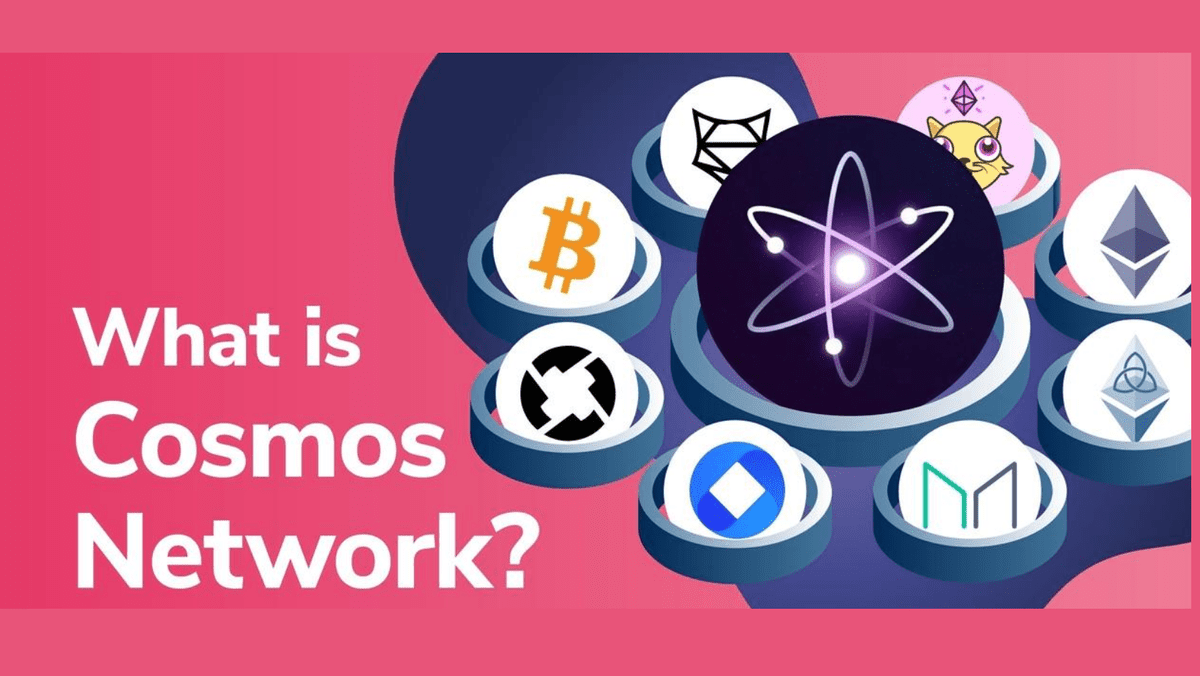 Cosmos, which bills itself as the internet of blockchains, is a decentralized network of independent but interoperable blockchains capable of exchanging data and tokens permissionlessly.

Cosmos aims to address some of the problems facing other blockchains – such as scalability, usability and governance – by providing developers with tools to quickly build their own blockchains for a variety of use cases and allowing blockchains in the network to communicate with each other.

Based on the byzantine fault tolerant (BFT) proof-of-stake Tendermint algorithm, Cosmos’ independent blockchains are called “zones”. Even when some nodes fail or act maliciously, a byzantine fault-tolerant consensus algorithm can reach consensus. Cosmos Hub is the first blockchain on the Cosmos network, and ATOM is its native token.

The origins of Cosmos #

Cosmos was not even an idea when blockchain software architect Jae Kwon founded Tendermint (also known as All in Bits Inc.) in 2014 and created Tendermint Core, a blockchain engine that creates proof-of-stake (PoS) consensus algorithms. Following that, together with Ethan Buchman, Kwon refined the Tendermint consensus algorithm that now powers Cosmos, and the two co-founders of Tendermint published the Cosmos white paper, “A Network of Distributed Ledgers,” in 2016.

To develop the Cosmos Network and build its infrastructure, the Interchain Foundation has partnered with software development company Tendermint. In 2019, Tendermint, one of the key contributors to the Cosmos ecosystem, raised US$9 million in a Series A funding round.

The CEO of Tendermint, Peng Zhong, in a recent interview that Tendermint Inc had originally intended to pursue enterprise blockchain and sell its consensus technology to large corporations. In the end, it decided to focus on building out the Cosmos network in order to create as many sovereign blockchains as possible and allow people to control their own networks with on-chain governance, but at the same time, be able to transfer assets between them.

“There is a lot of potential in blockchain to reshape collaboration and connectivity and decision making across the world, and we’ve seen a lot of examples of this with the chains that are IBC enabled right now” Zhong said.

“We see a future where there will be hundreds, thousands, tens of thousands and a million blockchains further in the future, and that’s what we’re building towards.”

Historically, blockchains such as Bitcoin operate in isolation from one another and are unable to communicate or interact with one another. Older blockchains are also hard to develop on and can only handle a few transactions per second.

A Cosmos network allows independent blockchains to exchange information and tokens without requiring permission. To achieve the vision of being a network of blockchains, it uses open source tools such as the Tendermint consensus engine, the BFT consensus algorithm, the Cosmos software development kit, and the Inter-Blockchain Communication Protocol, which acts as a TCP/IP for blockchains.

ATOM – the native token of Cosmos  #

The Cosmos blockchain, the first of the Cosmos ecosystem, launched on March 13, 2019. Cosmos Hub’s native token, ATOM, is used for transaction fees, staking, and voting. At the time of writing, Atom has a market cap of $7.8 billion, making it the 27th largest cryptocurrency, according to CoinGecko. At the time of publishing, ATOM is trading at US$27.39 according to CoinGecko, having reached an all-time high of US$44.42 on Sept. 20, 2021.

Cosmos is a decentralized ecosystem consisting of multiple independent blockchains. Cosmos has been used to build more than 260 applications and services, according to its website. According to State of the DApps, Ethereum has over 2,800 decentralized applications (dApps). The Cosmos ecosystem, however, could potentially have hundreds or thousands of Ethereums, each with its own dApps, since blockchains in Cosmos are independent blockchains.

Other projects in the Cosmos ecosystem include Osmosis, a DEX that people can use to create liquidity and trade IBC-enabled tokens. Osmosis saw the largest number of IBC transactions on Cosmos, with over 720,000 transactions in the last 30 days, according to Map of Zones.

Terra, which uses Cosmos SDK to build algorithmic stablecoins, includes the native LUNA token, the stablecoin USDTerra (UST), Anchor Protocol, Mirror Protocol, and Pylons. Terra enabled IBC in October, allowing users to trade across blockchains with other IBC-enabled blockchains.  Crypto.com is another exchange and wallet provider that uses the Cosmos network and is IBC-enabled.

Cosmos’ growth has been driven primarily by DeFi this year. However, their NFT market is gaining traction too.

How will Cosmos fare in the future? #

According to the Cosmos Hub roadmap 2.0, the Cosmos and Ethereum Gravity Bridge to transfer ATOM, Ether (ETH), ERC-20 and tokens on the Cosmos Hub between Ethereum- and Cosmos-compatible chains is part of the Cosmos Hub’s Theta upgrade expected to take place in the first quarter of 2022. Cosmos Hub will benefit from the bridge to Ethereum and other Ethereum Virtual Machine (EVM)-compatible blockchains. In addition to supporting non-fungible tokens (NFTs), the upgrade will also support liquid staking and multichain accounts for managing accounts across multiple blockchains.

According to a Cosmos Hub update in October, interchain security, which allows Cosmos Hub validators to validate multiple blockchains at the same time, is expected to be available in the first half of 2022. Interchain security will allow Cosmos Hub stakers to earn rewards on multiple chains while enabling shared security and integration with IBC.

Among the upcoming upgrades for Cosmos Hub are non-IBC cross-chain bridges, decentralized identifiers (DID), virtual machines, and zero-knowledge and optimistic rollups, according to its roadmap.

“[People] want to be able to use multiple protocols,” Zhong added, “and connect them all together in a way that would solve people’s problems.”

Lim, M. (2021b, December 7). What is Cosmos — the ‘internet of blockchains’? Forkast. https://forkast.news/what-is-cosmos-the-internet-of-blockchains/

F. (2021, October 6). An Introduction To The Cosmos Ecosystem And Its ATOM Token. ChainDebrief. https://chaindebrief.com/cosmos-ecosystem-atom-token/

The Atomic WalletHow to use SushiSwap