Trading and farming on Hive DEX

The Hive platform is a new and exciting project that appears to be prospering and flying as the days go by. It has some intriguing projects and tokens that can be easily traded on its DEXs.

A decentralized exchange (DEX) is a peer-to-peer marketplace where crypto traders conduct transactions directly with one another. Its role is to provide users with the most important crypto responsibilities, which is financial transactions. DEXs enable direct transactions between crypto traders without including any intermediaries, middlemen, or custodians such as banks, brokers, payment processors, and so on.

On the Hive blockchain, there are 3 main decentralized exchanges that help its users to perform transactions;

DEXs were created to eliminate the need for any authority to oversee trades conducted within a given exchange. Transactions are enabled by the use of self-executing agreements expressed in blockchain code, often known as smart contracts.

DEXs typically require users to have private keys in order to make transactions; this means that users retain control of their wallets through keys.

A private key is a sort of enhanced encryption that allows users to have access to their cryptocurrency assets. As a result, after signing in with their private keys to the DEX, users can simply view their crypto balance. They will not be forced to give any personal information or addresses, which is ideal for those who value their privacy.

DEXs are monitored automatically or by trade participants, and security is guaranteed by a distributed ledger technology. Exchanges on central exchanges (CEX) such as Binance, Coinbase, Bitmax, Bitfinex, and others unlike DEXs are typically recorded in the platform’s internal database.

DEXs are a set of smart contracts that assist establish the prices of multiple cryptocurrencies against one another algorithmically. They use liquidity pools where investors lock in exchange for income and incentives to facilitate trades.

Their codes are accessible for everyone to examine how they run and work. Allowing other interested developers to adapt existing codes and construct more efficient and competitive projects.

Hive engine, LeoDex, and Tribaldex are among the leading Dex exchangers today because they provide lightning-fast transaction speeds, appropriate privacy, and security for their customers via their private keys, and very low transaction gas fees. This endears this platform to its consumers.

Hive Engine and LeoDex are known to have a very similar Modus Operandi. That is, they mostly operate by simply fulfilling buy and sell orders. This means that people place orders to buy or sell assets, and when those orders are filled, the transaction is complete.

Tribaldex, on the other hand, operates in a Pancakeswap-like market, with permissionless liquidity pools managed by an algorithm. This is because it has its own market makers, these algorithms allow it to run automatically without the need for manually operated market makers.

Simply put, automatic market makers, such as those found on TribalDex, allow users to lend their assets to liquidity pools in exchange for liquidity tokens, which may then be utilized to generate more digital assets.

Assets on DEXs mirror each other #

The value of assets is one aspect that is shared by all DEXs; they mirror each other on all platforms, facilitating exchanges from one platform to the other at very low gas fees.

Both Hive Engine and LeoDex function primarily through user buy and sell orders, allowing users to swap crypto tokens at extremely low transaction costs and lightning-fast speeds. To perform transactions on Hive Engine or Leodex, you must first complete the following steps.

1. First, users need to create a hive user account on Hive.io or Leofinance.io
2. Login into the DEX with any of the keychains or hive wallets. Some of them are KeyChain for Hive, HiveSigner, Hive Auth, Peacock etc. 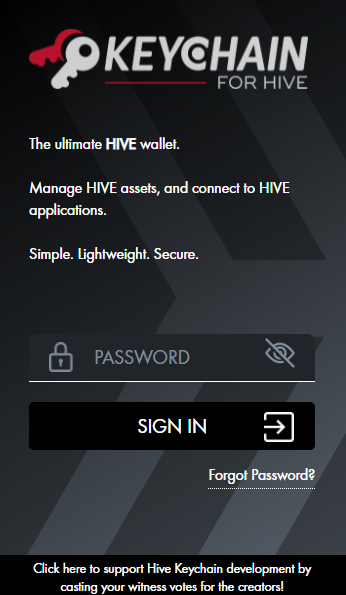 3. Once logged in, you will see a taskbar with a list of operations that can be performed using the decentralized exchange. 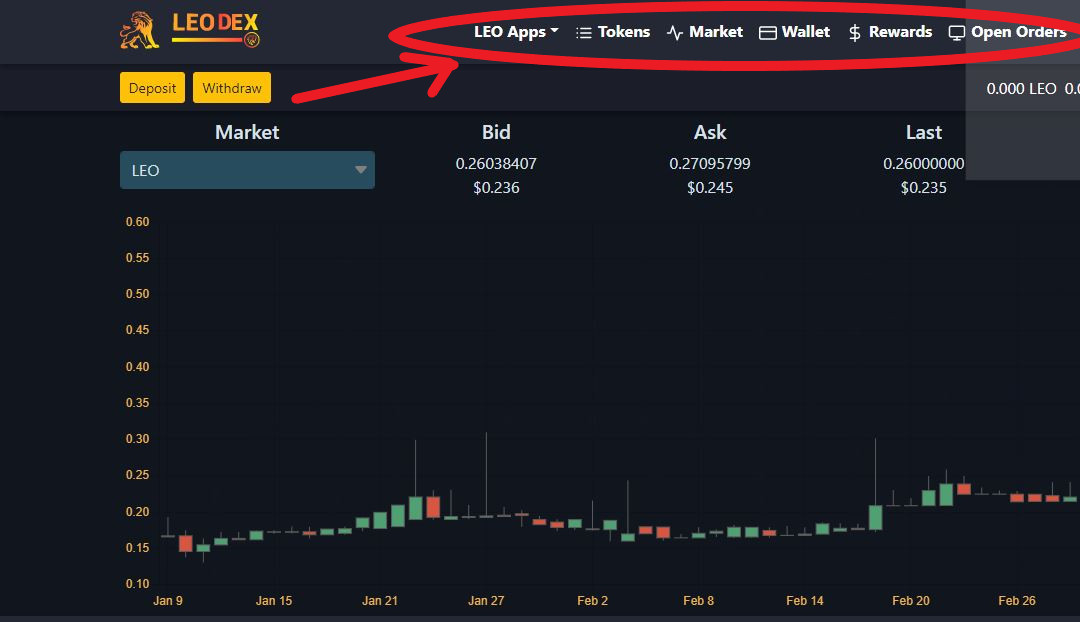 4. On the LeoDex platform, a chart depicts the fluctuations of a certain token selected from the Market tab 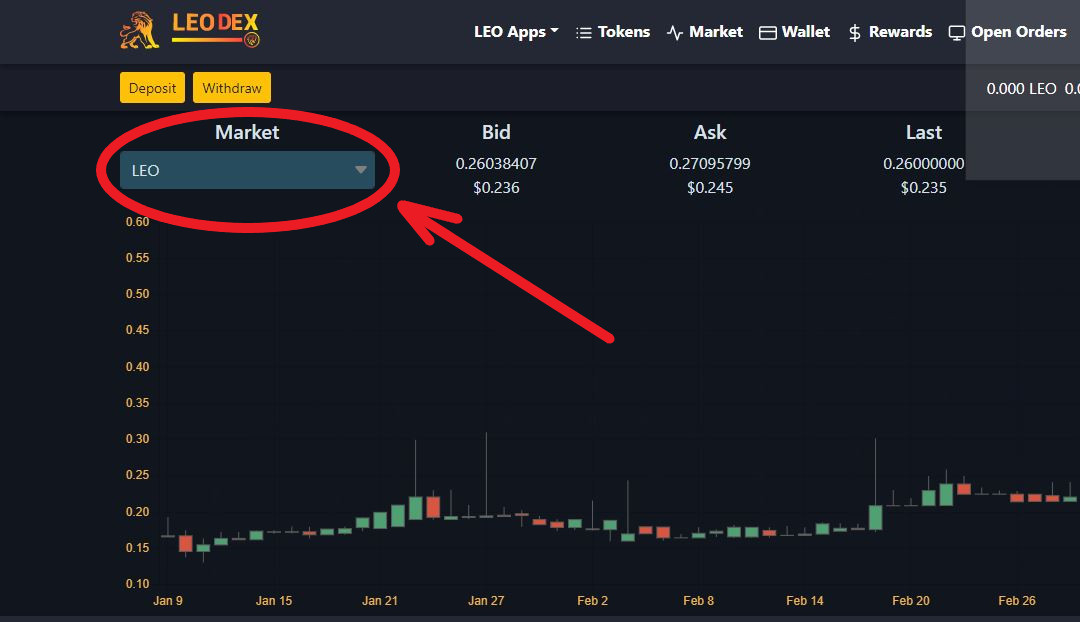 The chart also displays the most recent bidding price, asking price, token cost, and volume in circulation during a 24-hour period. 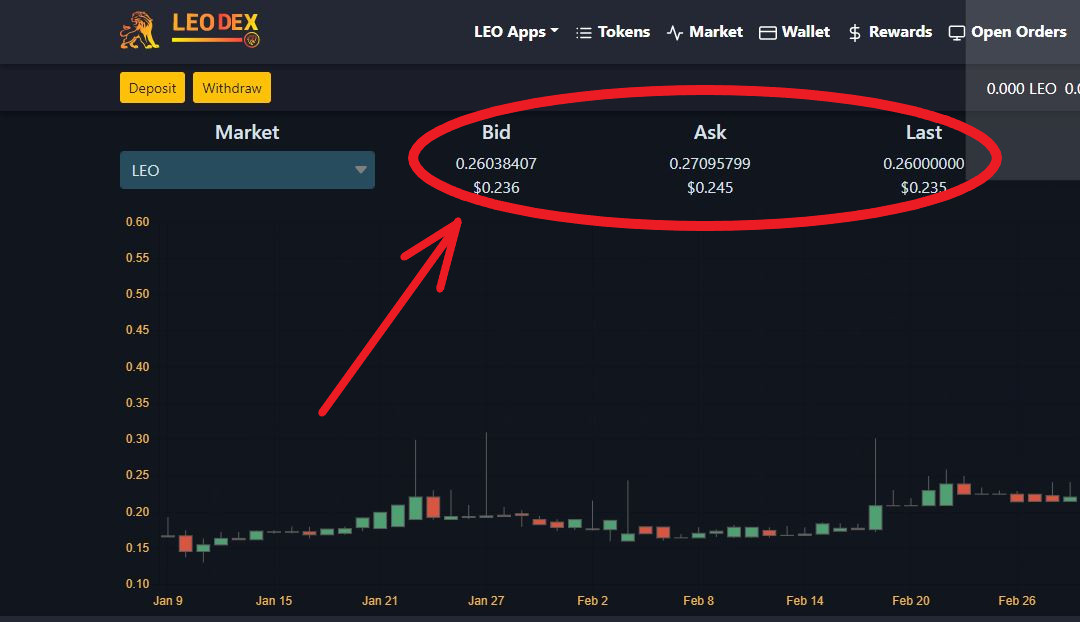 Each token’s chart can be depicted in candlestick, depth, or volume format, indicating changes in transaction volumes over a set period

Trades on Hive Dexs are basically done against the Swap.Hive token. Therefore, for any buy or sell order to be completed on the Hive blockchain, it is usually done with the Swap.Hive token. Swap.Hive can now be used as a means of exchange for other external assets like Swap.USD, Swap.BTC, Swap.Matic, Swap.BNB etc

5. As soon as the buy or sell order is successful, the assets are transferred to the user’s wallet at lightning-fast speeds.

Hive Engine and LeoDex functions use to buy and sell orders rather than automatic market makers like Tribaldex, and as a result, users must be cautious when conducting transactions because the possibility of entering the wrong figure is very high.

Overall, these DEXs are very trustworthy choices for performing transactions on the hive blockchain.

Unlike the hive engine and LeoDex, Tribaldex has a permissionless liquidity pool maintained by an algorithm. To utilize Tribaldex, you must first complete the following steps.

Login with a keychain or any other wallet #

1. Users must first create a hive user account on Hive.io or Leofinance.io.

2. Log in to the DEX using any of the keychains or hive wallets available. KeyChain for Hive, HiveSigner, Hive Auth, Peaklock, and others are examples. 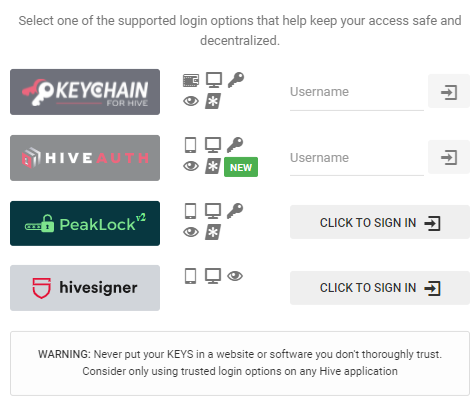 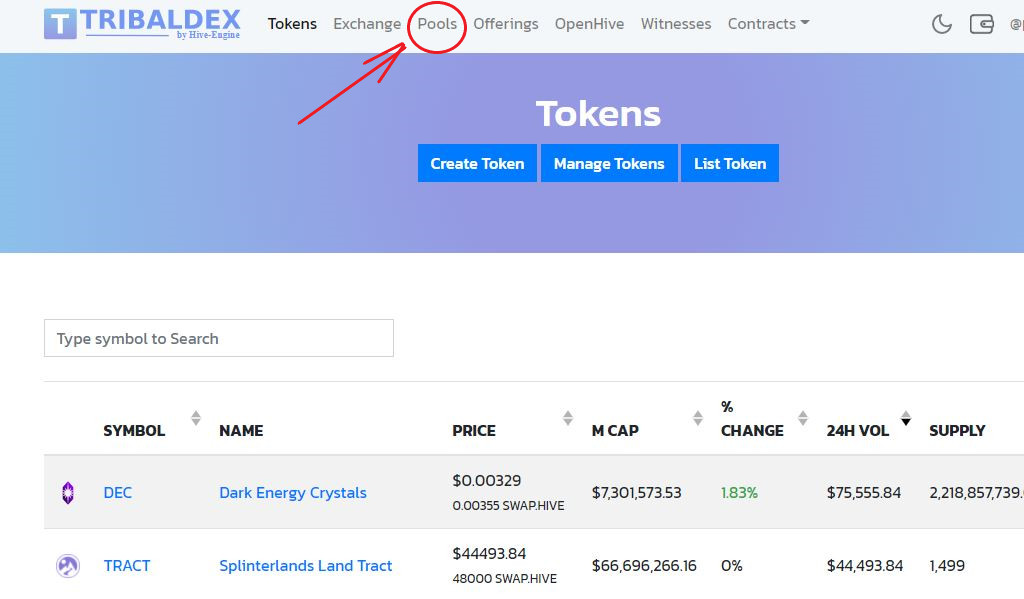 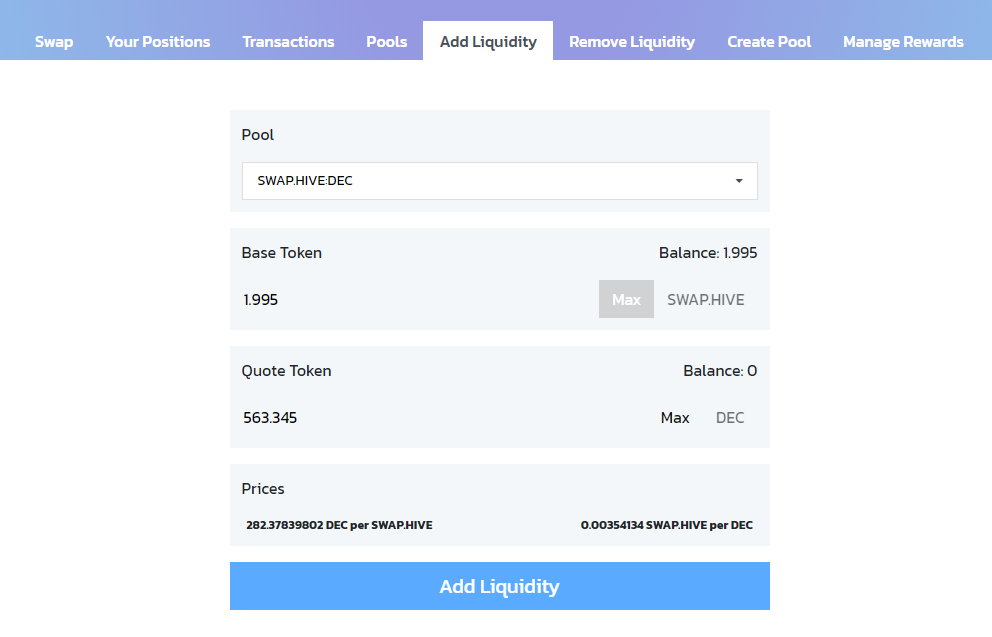 2. From the pool selection tab, select the pair of tokens you want to add to the liquidity pool. For instance SWAP.HIVE:DEC 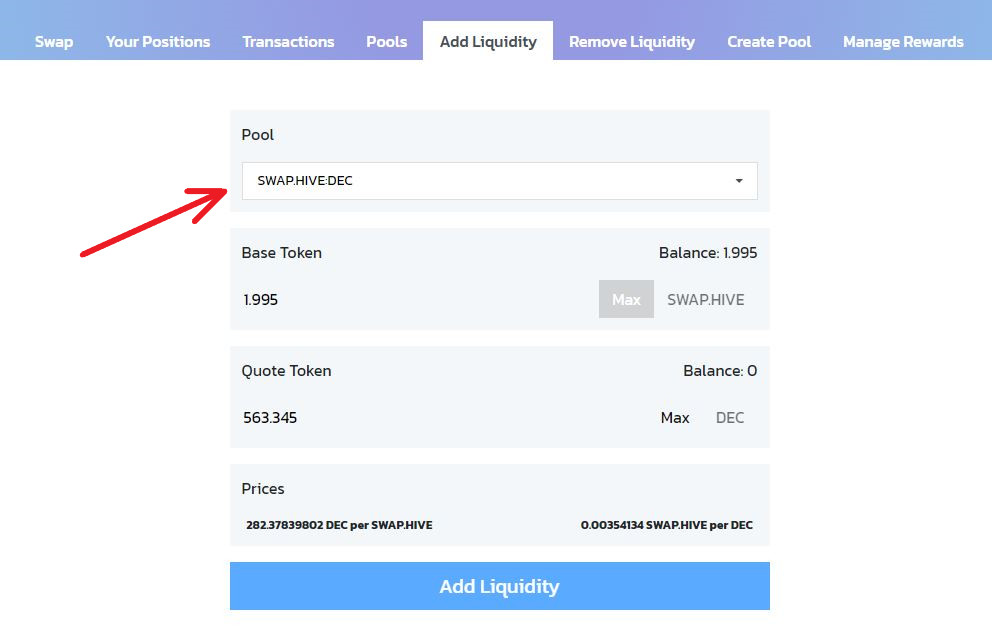 3. Fill in the amount on one of the tokens under “Input.” The other should be automatically calculated and filled. (If one of the tokens lacks sufficient balance. There will be an error and the add liquidity option will be disabled. To proceed, please enter a smaller sum.) 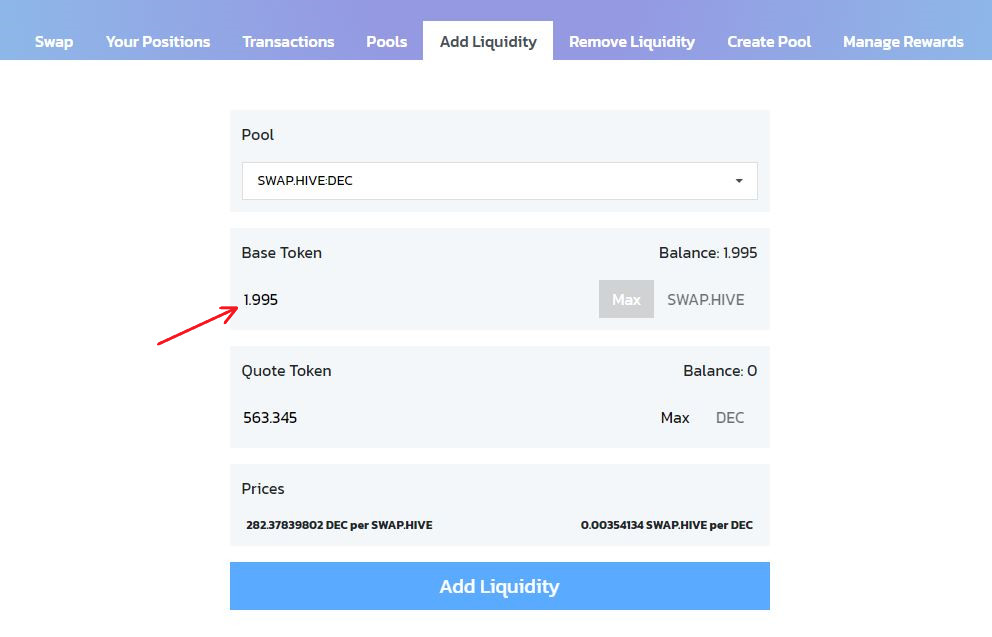 4. Add liquidity by clicking the “Add Liquidity” button. The action would have to be confirmed and approved by your wallet. 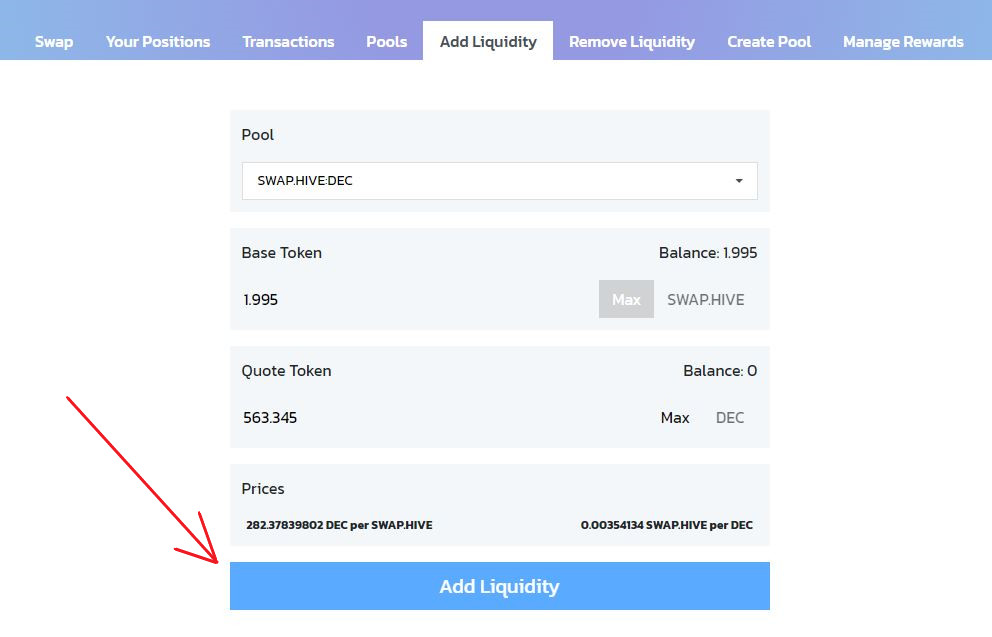 5. Confirm the transaction with your wallet, and then repeat the procedure to add more liquidation.

1. To swap tokens on Tribaldex, go to the taskbar and select pools.
2. Click on the swap button 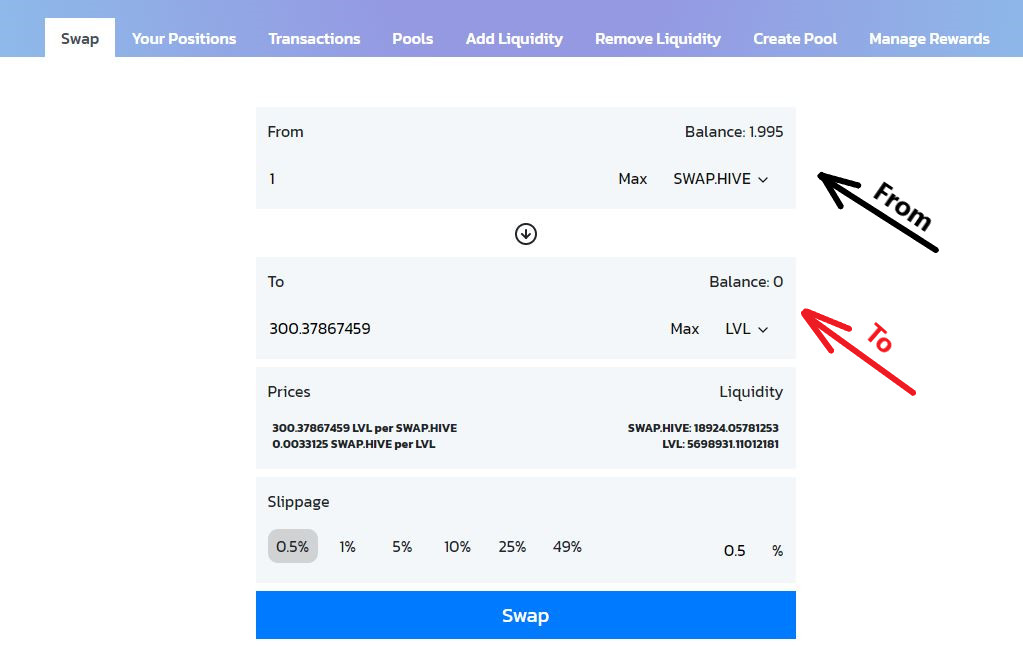 4. When the input has been made, click on the swap button and confirm with your wallet.

5. Check your wallet to confirm that the transaction is completed

DEXs have multiple advantages over traditional centralized exchanges. Here are a few:

However, nothing is perfect. Here are some of the disadvantages of DEXs:

Hive decentralized exchanges are rapidly changing the game by providing users with access to a plethora of fresh and intriguing projects and their tokens on the hive blockchain as well as external assets. It has made it easier for individuals who do not have a significant chunk of money to participate into crypto currency farming and earn rewards of up to 120% annual percentage rate (APR) from doing so.

Hive and its DEXs are particularly inviting to new users with little or no capital to join in on the various liquidity pool (LP) farming as it is a safe and homely place to perform transactions, meet fascinating people, and earn by putting up their contents like blogs, vlogs, games, art, music, and so on.

Hive is a young platform with enormous development potential. It is quite prudent to participate in one of our several initiatives, such as Splinterlands (which is arguably the largest blockchain game on the market today), among many others.