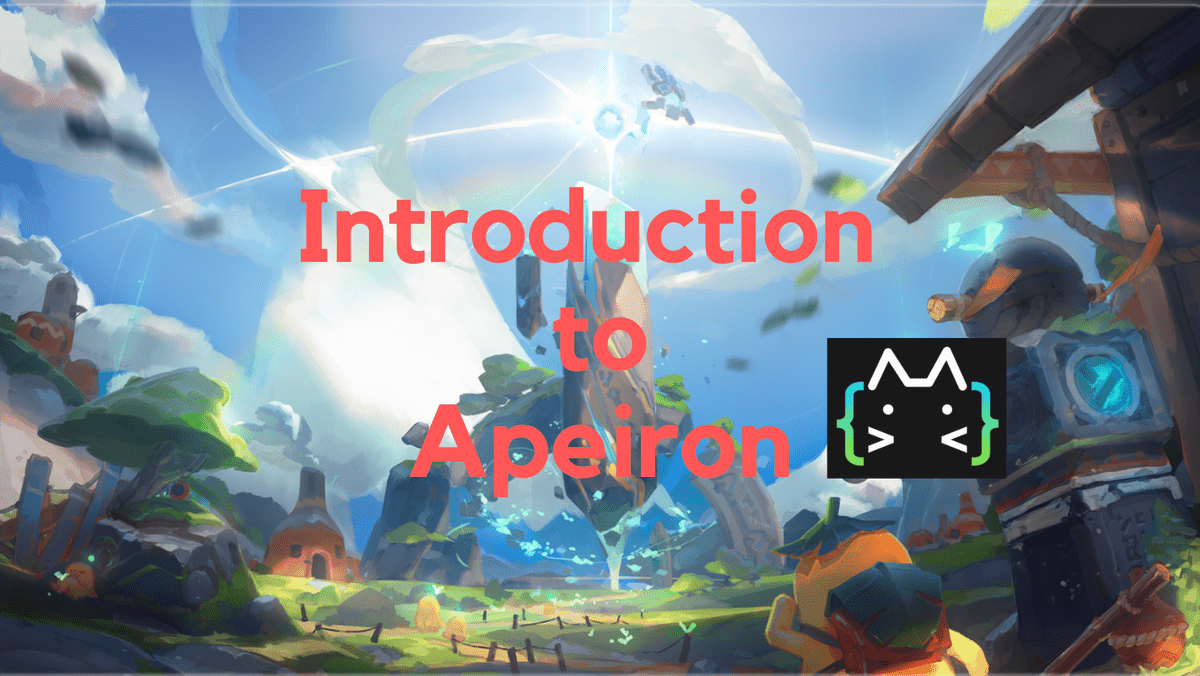 With hundreds of blockchain “games” being launched on a weekly basis, it’s always a delight to see a new pioneer bring something original to the GameFi table. So, in this article we will take a closer look at Apeiron, the first God Simulation Hybrid blockchain game to be launched!

Set to be launched in Q4 of 2022 on the Ethereum blockchain, Apeiron will be the first God Simulation Hybrid blockchain game. Like other big titles such as League of Ascension, Star Atlas and SIPHER, Apeiron has a thicc (yes, you’ve read that right) whitepaper that has the game mechanics fully worked out. As of writing, the team is working hard on the games Alfa, marketplace and various NFT presales.

Similar to other blockchain games, Apeiron combines gameplay with NFT ownership. In essence, Apeiron is a god-game simulation and action roleplaying game with NFT ownership for its players. In it’s core gameplay, the player controls an Avatar, located on a planet, that can help or destroy its civilization, which are called Doods.

By performing miracles, such as saving drowning Doods, making fire, and growing trees, the Doods will start to worship your Avatar. If the player keeps performing these actions, their Avatar will level up, which unlocks new powers and capabilities, such as performing new miracles to help the Doods, and the ability to discover their planet’s Dungeons. These Dungeons play an important role in Apeiron, as they conceal valuable treasures, such as Apostles.

Apostles are Doods with special skills, that are capable of leading Dood disciples to help the player’s Avatar in PVE and PVP battles. As of writing, there are 12 classes of Apostles, which are the Warrior, Mage, Rouge, Bard, Guardian, Hunter, Priest, Shaman, Summoner, Dragoon, Knight, and Berserker. Each Apostle class performs different on the battlefield, and it’s up to the player to figure out which type of Apostle compliments his playstyle the best.

Now, here’s where things become interesting. As you might have figured out, planets and elements play a huge role in Apeiron. In order to get started, players need to either purchase or borrow a planet, or use a free seed phrase from a guild. Each planet can have up to 4 elements, which influence the shape of the planet and the Avatar, as the Avatar is linked to- and thus obtained when the player purchases/mints/etc. their planet.

Players with multiple planets can perform a holy event known as Celestial Conjunction, which enables players to breed new planets (and avatars), potentially unlocking new hidden skill cards for battle. It’s important to keep in mind that having multiple planets help the player level up faster.

However, planets will reach the end of their cycle eventually, which flattens down the player’s leveling curve. When players reach this state, they can initiate an Armageddon, which resets the planet and destroys its Dood society. By initiating Armageddon, players will receive lots of Soul Gems, lasting bonuses, and in-game tokens. Keep in mind that Dood Apostles will also perish, but luckily for the player, they can be converted into NFTs, and used again once the planet is reset, or on an entirely different planet.

There’s one more NFT type that will help the player’s planets to perform better in one way or another, which are stars. Players can mint/purchase stars and align their planet(s) to them. Each star will be a unique NFT and will provide the planet with extra (flat) bonuses, such as an increase in earning XP for certain elemental planets etc.

Finally, when reaching the end game, players can fight against each other in RPG PVP battles to climb the ranks, earn in-game tokens and other rewards. There will also be e-sport categories, endless dungeon modes, and mini-games.

In contrast with other blockchain games, Apeiron uses a tri-token structure rather than a double-token structure. The team believes that by introducing a third token, price volatility can be kept to a minimum. The three tokens that Apeiron introduces to the ecosystem are:

While Anima and Ringularity will be minted in-game, Apeiros will be minted and issued over a timespan of multiple months. The full token release schedule can be viewed here. The team will hold around 30% of the token’s total supply.

The Apeiron team has worked out a complete roadmap until Q4 of 2023. Key milestones are the launch of the Alpha, Marketplace, Sidechain (probably Polygon), Staking mechanism, NFT creation, Various game modes and of course the launch of the full game. Overall, the roadmap looks professional en realistic.

Apeiron is going to be a unique blockchain game with beautiful graphics that is most likely going to bring a refreshing breeze through the GameFi world. It sure is interesting to follow the development of games and their tokenomics in the fast paced GameFi environment, and many crypto investors expect Apeiron to deliver a high quality game with solid tokenomics.