15 Cryptocurrencies You Can Still Mine 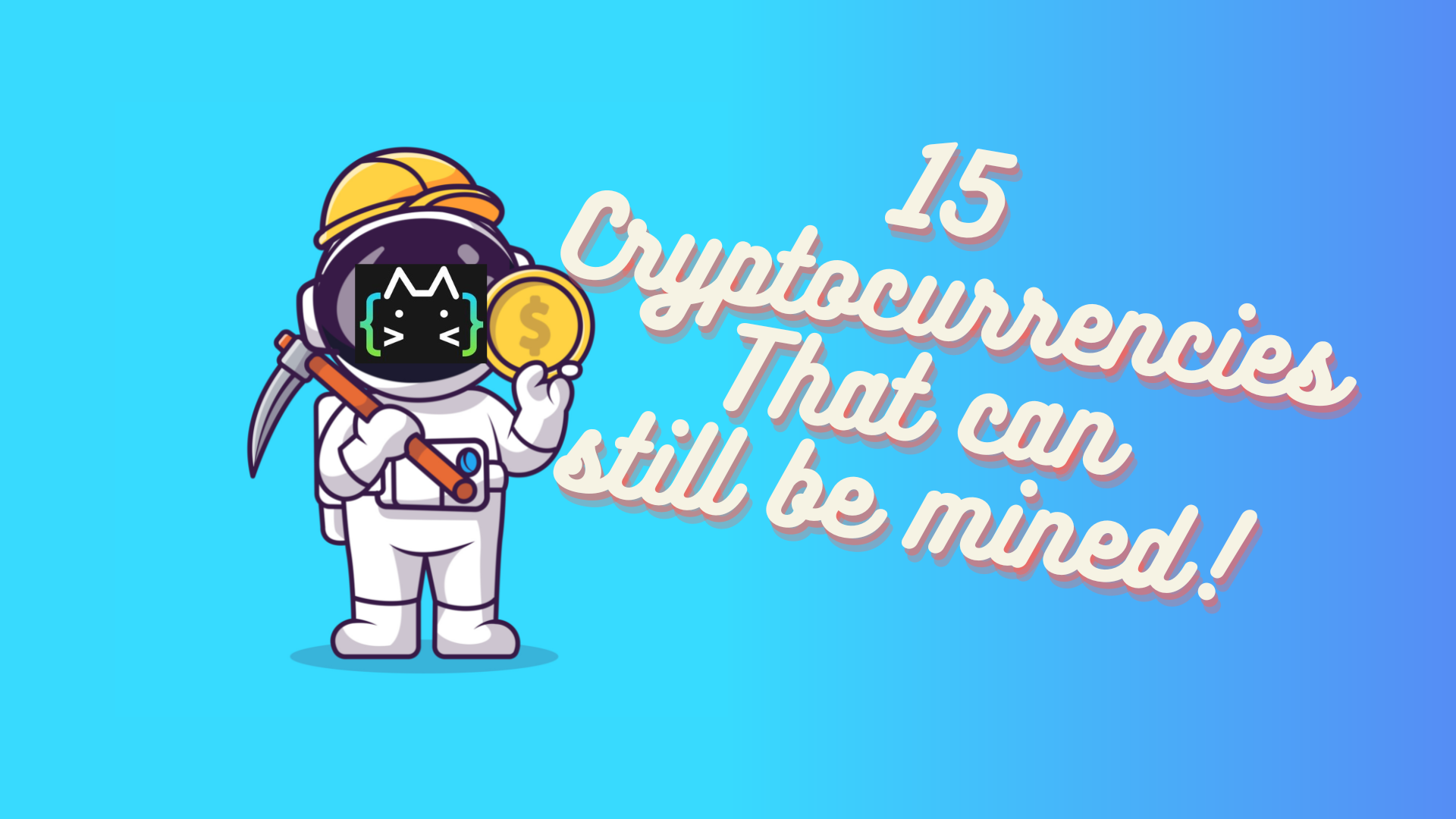 The crypto market continues to develop, which means that some features of the crypto market are becoming less and less common. The Proof-of-Work (PoW) mechanism is an example of this. Previously, this method was mainly praised because it made a good contribution to decentralization. Today, PoW is less and less preferred by crypto enthusiasts.

This is partly due to the rise of Proof-of-Stake (PoS). This mechanism is many times faster and is also scalable. In addition, PoS is also seen as a more environmentally friendly solution for verifying transactions on the blockchain. Nevertheless, there are still a lot of cryptocurrencies that use PoW. You can also mine these cryptocurrencies yourself.

With the right equipment you can get started and in this way supplement your crypto portfolio. Due to the current energy prices in the winter of 2022, there is a good chance crypto mining is not profitable at the moment, but this is a snapshot. When you start mining the right cryptocurrencies, this can pay off during a subsequent bull run.

When people talk about crypto mining and PoW, people quickly think of Bitcoin. The most famous cryptocurrency on the crypto market has been using this mechanism since its inception. In the early years you could still mine Bitcoin relatively easily. We are talking about a period before the different halvings, where you still received 50 BTC per block!

After the halvings of 2012, 2016 and 2020, we are now waiting for the next halving in 2024. At the moment, the yield is 6.25 Bitcoin per block. After the halving in 2024, this will only be 3,125 Bitcoin per block. These halvings are important for Bitcoin because they inhibit the Bitcoin surge. This can have a positive effect on the price when the demand for Bitcoin is huge.

A fairly notable appearance in this list is Ethereum. But Ethereum switched from PoW to PoS in 2022?! That’s right, but there are tokens that are still related to Ethereum and do use the PoW mechanism. These are the coins Ethereum Classic (ETC) and EthereumPoW (ETHW).

Ethereum Classic is the original Ethereum, where it all started. In the early years, a hacker stole $60 million worth of cryptocurrencies from the Ethereum blockchain. A hard fork was performed to undo this hack, but not everyone agreed.

Ethereum was created as a decentralized project and making a move is not an example of decentralization. Part of the community did not consider the rollback of transactions to be ethical and did not agree with the hard fork. They preferred to lose their investment to prioritize decentralization. This group continued to validate transactions on the old blockchain and so Ethereum Classic was born.

Years later, there was another big event for Ethereum, but this intervention was planned. Ethereum wants to make transactions cheaper, faster and more sustainable, so the blockchain switched to PoS. This event, too, did not satisfy everyone in the community. EthereumPoW (ETHW) was therefore created and is a hard fork of the Ethereum blockchain. Ethereum miners who still want to use PoW will now start mining ETHW.

Perhaps the oldest memecoin on the crypto market also uses the PoW system. Unlike Bitcoin, where a maximum of 21 million Bitcoin can be mined, the possibilities with Dogecoin are endless. There is a maximum amount of DOGE, so you can keep mining forever.

This also makes it a lot more difficult for the coin to ever break the magical $1 limit. Because it remains possible for miners to continue mining DOGE, the supply is very large. In order to still be able to rise considerably in price, it is important that there is a big hype around the coin.

In 2021, thanks to Elon Musk, this also happened, causing the coin to rise almost 2000%. This caused DOGE’s price to hit a new all-time high just above $0.70, but this was not yet $1. However, to reach the magic $1, Dogecoin will have to have a market cap of 140 billion. A huge number, which until today (November 2022) only Ethereum and Bitcoin have succeeded.

When you think of Bitcoin-related cryptocurrencies, you quickly come to Litecoin. This coin was extremely popular in 2017 and was compared to gold and silver along with Bitcoin. Bitcoin was gold and Litecoin was silver. Of course a wonderful piece of marketing, but to date this prediction has not yet come true.

Like Bitcoin, Litecoin is a very old crypto coin, which saw the light of day in 2011. The CEO and founder of the project is Charlie Lee, who worked at Google before his adventure with Litecoin. In the heyday of Litecoin, this altcoin even climbed into the top 3 cryptocurrencies!

Like most PoW coins, Monero (XMR) is a very old coin, which has been on the crypto market since 2012. The crypto project is under the name Bytecoin, but due to disagreement there was a fork and Bitmonero was created. Later the name was changed from Bitmonero to Monero.

Monero is known for the privacy that is guaranteed. Transactions via Monero are untraceable thanks to a special cryptography. As a result, it is not possible to trace the identity of the sender, so that you can carry out transactions completely anonymously. As more and more people become aware that their privacy is decreasing, interest in Monero is increasing.

Besides Monero you also have Monero Classic. In the early months of 2018, this coin rose explosively, but eventually the price of Monero Classic also followed the rest of the crypto market. In the end, this coin was never able to recover from the bear market in 2018. This is in contrast to Monero, which set a new all-time high in 2021.

Another privacy coin is ZCash, which, like Bitcoin, has a total of 21 million coins. ZCash is a decentralized cryptocurrency that makes it possible to send transactions completely anonymously. Transactions are published on ZCash’s public blockchain, but the sender, receiver and amount of coins are kept secret.

ZCash made a wonderful run up during the bull run of 2017, but in 2021 this run was less. For example, no new all-time high was made in 2021. Personally, I would rather start mining Monero than ZCash, because Monero has made another all-time high in 2021. However, this is not financial advice, but a personal preference based on price action.

Another veteran of the crypto market is DASH. This cryptocurrency also uses the PoW mechanism and makes it possible to perform semi-anonymous transactions. Because the nodes on the network carry out several transactions at the same time, it is difficult to know who sent which transaction. However, both ZCash and Monero score better when it comes to anonymity.

DASH entered the crypto market under the name DarkCoin in 2014 and was given its current name in 2015. Also for DASH, no new all-time high has been set in 2021. This was achieved in 2017 and just like ZCash, I personally would rather start mining Monero.

The newest crypto project in this list is Kadena (KDA). This crypto project started in 2016 and launched Kadena’s token in 2019 with KDA. The company aims to revolutionize the crypto market. This must be done by a unique blockchain technology.

Kadena has managed to use the PoW mechanism, while it is still possible to perform fast and cheap transactions. As a result, the project combines the security of Bitcoin with the cheap transaction costs of, for example, Fantom (FTM).

At Kadena, 70% of the total number of tokens is reserved for mining KDA. In total, all KDA tokens will be mined in 120 years. There is therefore a good chance that, just like with Bitcoin, we will not see the last coins being mined.

Despite this low percentage, it is striking that many well-known cryptocurrencies still use PoW. This is because they are older crypto projects, but they are still popular. Bitcoin and Monero are the best examples of this, as they set a new all-time high in 2021. Nevertheless, not everyone is very enthusiastic about the PoW system and they prefer to see the PoS system.

The PoS mechanism is a lot more user-friendly. This mechanism ensures that transactions can be processed even faster, while the costs remain a lot lower. In addition, PoS is seen as the sustainable solution. It is therefore not surprising that Ethereum has switched from PoW to PoS. This is part of their plans to become a sustainable, fast and scalable blockchain.

What is the Binance Gift Card and how does it Work?Introduction to Aptos